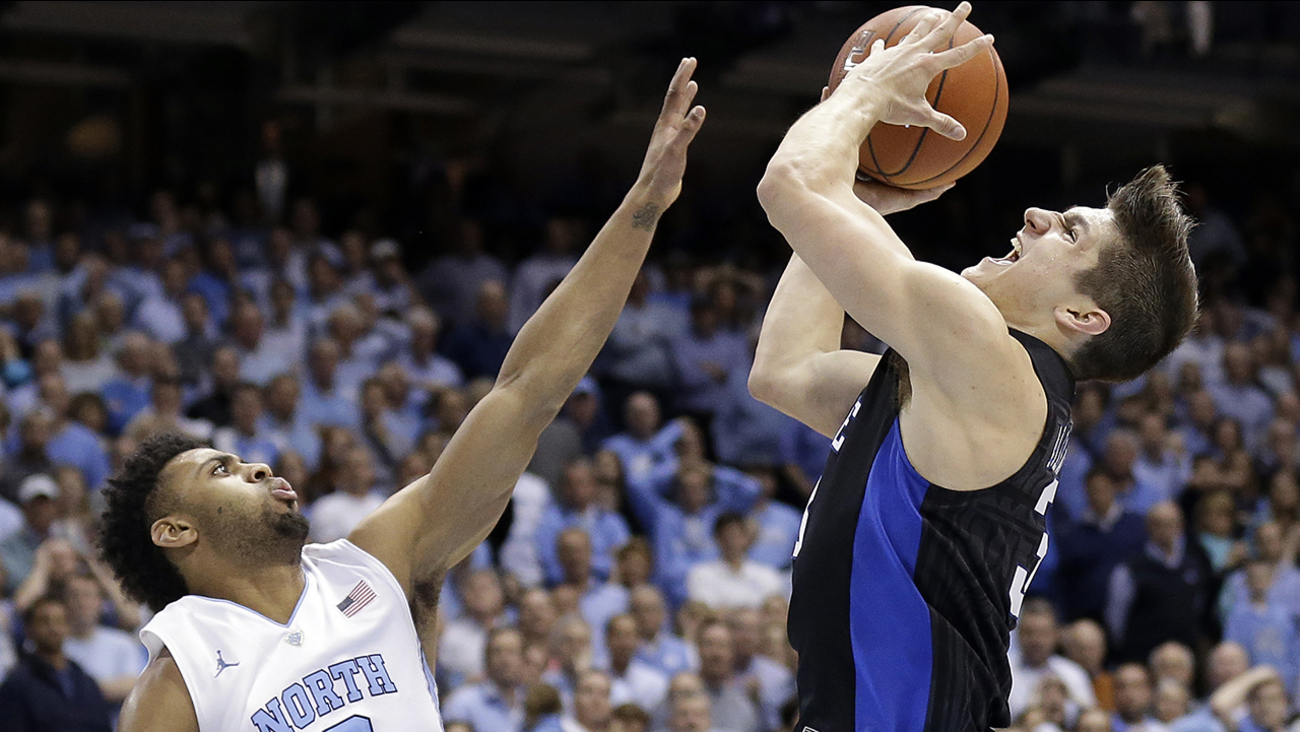 Who knew these guys -- and their families -- went way back? (Gerry Broome)

DURHAM, North Carolina -- Duke's Grayson Allen, the most scrutinized player in college basketball, was just trying to fly home for the holidays, but he was stuck in the line to drop off luggage with everyone else.

It had been less than 12 hours since his latest tripping incident, on Dec. 21 against Elon, and at least three hours before the indefinite suspension he received from coach Mike Krzyzewski would be announced publicly.

The last thing Allen, a native of Jacksonville, Florida, wanted to be was the focus of unwanted attention, especially before 6 a.m. North Carolina's Joel Berry II, meanwhile,was trying to get back to Florida, too, as he popped up in the same line at Raleigh-Durham airport shortly after Allen.

The Tar Heels and Blue Devils prepare for the latest chapter in the storied rivalry on Thursday (8 p.m. ET, ESPN/ESPN App), and Berry and Allen will face each other for the fifth time in college. But on that December morning, they talked as travelers often do while being herded through an airport maze.

"We were at baggage, and we were both upset," Berry said. "We had got there like an hour early, but the line was so long we couldn't get our bags on the plane. We heard the dude say if you're boarding and it's five minutes left, they can't take the bag."

Berry and Allen incrementally shuffled their feet and inched forward toward the counter. For about 25 minutes, they talked about their families and how badly they already wanted to be home for their only substantial break in the season.

"We didn't talk basketball," Allen said. "We were going through the same experience."

By now, it seems everyone who has seen Duke play has an opinion on Allen. He might be the most polarizing figure in college hoops. His actions can be over-analyzed, and most times he doesn't get the benefit of the doubt:

Never mind that Gates made it clear he believed Allen made a hustle play.

He was trying to start beef with NC State's Terry Henderson as he walked through their timeout huddle.

Never mind that the Wolfpack came onto the court where they use folding chairs to extend their huddle well inside the 3-point line.

He nearly started a bench-clearing brawl when he got tangled with Bryant Crawford at Wake Forest.

Berry has seen and heard all about Allen's run-ins, and he has an opinion, too.

"I think he's a great dude, even with the things that happened to him," Berry said. "I've been around him a great bit, whether it was us playing in the [AAU] tournaments or going to the camps with each other, so I know him personally, and he's a great guy."

Allen seemed a little off to Berry at the airport. And during the time Berry was delayed at the airport, he eventually found out why. Berry said he heard another passenger talking on their phone about Allen's suspension.

"I saw the video on ESPN. They had it in the airport about him getting suspended indefinitely," Berry said. "I was like, dang, I just saw him and I didn't know about it. He seemed a little down, but I didn't think anything of it."

Had Berry known, he might have offered a bit of encouragement.

The two don't claim to be best friends. They don't text often or call each other to hang out. But they do share a mutual respect, and each considers the other a friend.

From Berry's freshman season in high school until the summer before his senior year in high school he played for the Orlando-based Each 1 Teach 1 AAU program, sponsored by Amar'e Stoudemire's foundation. Berry's father also helped out as an assistant coach.

During Allen's final summer before graduation, he played one tournament with another organization before joining up with E1T1.

"He [Joel] was one of the best players in Florida from when he was a freshman in high school," Allen said. "I always knew who he was. Going to play for Each 1 Teach 1, that was pretty much his team, because that's where he's been since he was younger. And from Day 1, he was just great about it. Even though we had the Duke-UNC thing going on, there was never any of that."

Well, maybe a little, just not in a way that reflected a rivalry. Edward "Boobie" Francis, who coached Each 1 Teach 1, used the connection to associate different names for similar plays.

If he called, "Carolina," then Berry would take the shot. If he called out "Duke," it was Allen's turn to take over. He did the same in calling out "Ohio State" for former Buckeye D'Angelo Russell. Francis still has a fondness for that summer of 2013 team because of the family-type atmosphere he said they maintained. Berry was an unselfish team leader. Allen accepted a role coming off the bench, primarily because he was late joining the team.

"The one [time] where I knew they were kind of together was when we were playing Mac Irvin Fire out of Chicago," Francis said, referring to a play involving Allen.

The shoving started before the momentum from a hard foul carried Allen out of bounds.

Allen didn't need his Each 1 Teach 1 teammates to back him up. He'd gotten used to having his mettle tested on the AAU circuit, and it's partly how he developed the physical style of play he maintains at Duke.

He got help anyway.

Berry sought out the player who fouled Allen and retaliated with a shove of his own.

"Grayson was playing hard, and the guy took exception to it and kind of pushed him into the bleachers, intentionally fouling him," Francis said. "As they got into the melee Joel ran over there and kind of defended him and pushed the guy back and just kind of stood up for him."

It's something that Allen never forgot.

"He was the first one there," Allen said. "And from then on we just had each other's back."

Allen and Berry played on the same team on other occasions, too. That summer of 2013, both played for team USA South in Nike's Global Challenge. The following spring they were again paired together on the McDonald's All American West roster.

Alex Owens, who is now nearby to both players at Shaw University in Raleigh, North Carolina, played with Allen and Berry on E1T1 and in the Global Challenge. Owens said the two were friends because they're a lot alike on the court.

"It's hard to find somebody that loves the game like Grayson," Owens said. "Both of them have the heart to win everything. ... I've seen times where Joel will get close to reacting how Grayson is at Duke kind of, but he'll keep his composure."

Joel Berry Sr. is a big believer in the power of positive thinking. He texts the same message to his son before every game: "Play hard for your brothers, and something good will happen. Believe."

Joel Berry II didn't start a game as a freshman. He averaged just 4.2 points in 13.2 minutes per game.

Allen didn't start a game as a freshman. He averaged just 4.4 points in 9.2 minutes per game.

When both players went from being the stars of their high school teams to reserve roles in college, Berry Sr. felt compelled to contact Allen's parents.

"My message to them is always talk to them about believing," Berry Sr. said. "Believing in a higher power, believing in yourself. My messages are short and simple -- just keep believing, and something good will happen."

When Allen had 16 points and helped Duke beat Wisconsin in the 2015 national title game, Berry Sr. sent a text congratulating the Allen family. They returned the favor when Berry II and Carolina made last year's Final Four.

The Allens, through a Duke spokesman, declined to be interviewed for this article.

That includes well wishes before Duke and Carolina square off each time. Berry II and Allen won't be texting each other, but their parents will.