WTVD-AP
WASHINGTON -- John Conyers has dealt with various ethics investigations and a public corruption case that landed his wife in prison during a U.S. House career spanning more than five decades - longer than any other current member.

Allegations that the 88-year-old Michigan Democrat sexually harassed female staff members may be the toughest opponent yet for the party's top member on the House Judiciary Committee.

"He's not as sharp as he used to be," said Adolph Mongo, a longtime follower of Detroit politics who has worked on mayoral campaigns. "This is a young person's game now. You hate to see somebody who has put in 50 years ... go out like this."

Leaders of the House Ethics Committee announced Tuesday that the panel had begun an investigation into Conyers after receiving allegations of sexual harassment and age discrimination involving staff members as well as using "official resources for impermissible personal purposes."

Conyers said he would fully cooperate.

News website BuzzFeed reported Monday night that Conyers' office paid a woman more than $27,000 under a confidentiality agreement to settle a complaint in 2015 that she was fired from his Washington staff because she rejected his sexual advances.

BuzzFeed also published affidavits from former staff members who said they had witnessed Conyers touching female staffers inappropriately - rubbing their legs and backs - or requesting sexual favors. One former staffer said one of her duties was "to keep a list of women that I assumed he was having affairs with and call them at his request and, if necessary, have them flown in using Congressional resources."

When questioned at his home Tuesday morning by The Associated Press, Conyers denied settling any harassment complaint and other allegations of inappropriate touching of staffers. The reporter repeated to Conyers the claims made in the BuzzFeed report.

Conyers' office said in a statement that he was under the impression the AP reporter was speaking of "recent allegations of which he was unaware of and denied."

"In this case, I expressly and vehemently denied the allegations made against me, and continue to do so," Conyers said later Tuesday in his statement about the settlement. "My office resolved the allegations - with an express denial of liability - in order to save all involved from the rigors of protracted litigation."

Court documents show that another ex-staffer attempted to file a federal lawsuit in Washington alleging sexual harassment, retaliation and a hostile work environment.

The woman claimed in the proposed filing from February that Conyers began making sexual advances and inappropriate comments shortly after she was hired in 2015. She also said Conyers blew kisses when "others' backs were turned" and would "rub her shoulders, kiss her forehead and attempt to hold her hand."

The woman wanted to file a lawsuit under seal to avoid embarrassing Conyers, but a judge denied the request. No further action has been taken since March.

Conyers' office said in an email Tuesday night to the AP that "the former staffer voluntarily decided to drop the case." A message left Tuesday evening at the number listed for the woman wasn't immediately returned.

Since Conyers arrived in Congress in 1965, he has easily won re-election bids, usually with more than 80 percent of the vote.

In 2006, the House Ethics Committee closed an investigation after three former aides said Conyers used them as baby sitters and personal servants while they were supposed to be working in his Michigan offices. The aides also said Conyers had them pay restaurant and motel bills. Conyers agreed to clarify work rules with his staff to ensure his office was in compliance with ethics regulations.

He emerged unscathed after his wife, Monica Conyers, pleaded guilty in 2009 to conspiracy to commit bribery as a member of the Detroit City Council. She admitted to taking bribes in exchange for her vote on a $47 million sludge hauling contract. She entered prison in 2010 and was released to a Detroit halfway house in January 2012.

Joe Lanier, owner of hair stylist shop Terry's Place in Detroit, said he hates to hear about the allegations against Conyers "because he's been a force in the community for many, many years."

The Office of Compliance released the numbers amid a wave of revelations of sexual misconduct in the worlds of entertainment, business and politics that made its way to Capitol Hill last week.

Two female lawmakers described incidents of sexual harassment, one in explicit detail, and Minnesota Sen. Al Franken apologized to a woman who said he forcibly kissed her and groped her during a 2006 USO tour.

Conyers has earned the benefit of the doubt, said the Rev. Horace Sheffield, who lost to him in the 2014 Democratic primary.

"I don't condone the conduct if it's true," Sheffield said, also noting the increasing numbers of claims of harassment, sexual misconduct and even rape being made against politicians, Hollywood elites and others.

"We're at a point, too, where we have to look at the nature of these allegations," said Sheffield, pastor of New Destiny church in Detroit. "Some stuff may be considered flirtations as opposed to things that are predatory."

If Conyers makes it through the current scandal, he likely will retain his seat in Congress if he seeks re-election again, Sheffield added.

"I think Conyers will be there until the day he dies," Sheffield said. "The voters have proven that."
Report a correction or typo
Related topics:
politicsscandalbuzzworthysexual misconductdemocratspoliticsu.s. & worldsex scandal
Copyright © 2020 ABC11-WTVD-TV/DT. All Rights Reserved - The Associated Press contributed to this report.
RELATED 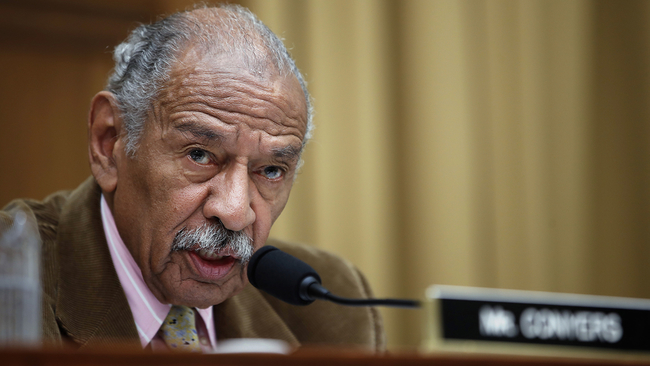