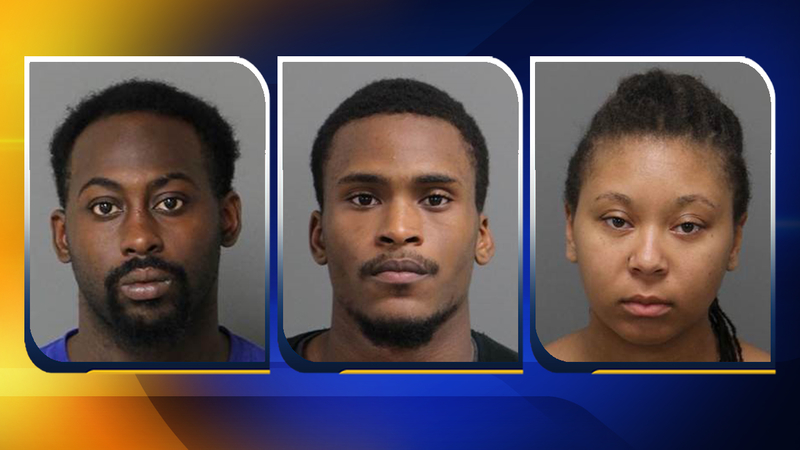 APEX, North Carolina (WTVD) -- Two Durham men are behind bars after police say the duo unknowingly burglarized the home of a long-time cop, turned chief, who came at them armed and shooting.

If the name Blair Myhand rings a bell, it's because he was most recently the spokesman and public face of the Apex Police Department before moving up to the chief's job in Clayton.

Around 4 a.m. on Friday, he and his wife were like most of us, sound asleep, but then the unthinkable happened ... He heard the sound of someone in his home.

"It's certainly a traumatic experience to wake up and realize that there's someone in your house," Myhand said.

Myhand said it was their dog that actually got the attention of his wife, Nana, who saw the men through an open bedroom door.

"I knew that this wasn't right, and I knew I had somebody next to me that could handle the situation," she said. "I knew that it was on."

She quietly woke up her husband who saw the men and had one thought.

"I am not going to allow my wife to be harmed."

So, Myhand quickly went for his gun.

"One guy was out the door by the time I turned the corner," he explained. "The second guy was there and I fired a round at him and he ran out the back door, he fell, and so I thought that I had hit him with the round but he jumped up and took off."

The bullet had just missed the man, piercing the back of a deck chair and lodging itself into a retaining wall.

They were arrested on charges of first-degree burglary. They were also charged with breaking or entering a motor vehicle and misdemeanor larceny, in relation to other recent crimes.

Police also arrested 23-year-old Raquicia Laquandra Reams. She is charged with the same crimes, but police believe she was driving the getaway car.

It's not clear which one Myhand shot at.

But Myhand made one critical mistake that he hopes others will learn from.

"I did exactly what I tell everybody not to do and I left my back door unlocked because we got complacent because nothing ever happens here," he said. "And I would say that the lesson learned from this is that it's unfortunate that we have to lock our doors at night but had we locked our back door this crime never would have happened to us ... It does lend a new perspective as to what being a victim of a crime means to people especially one as serious as this."