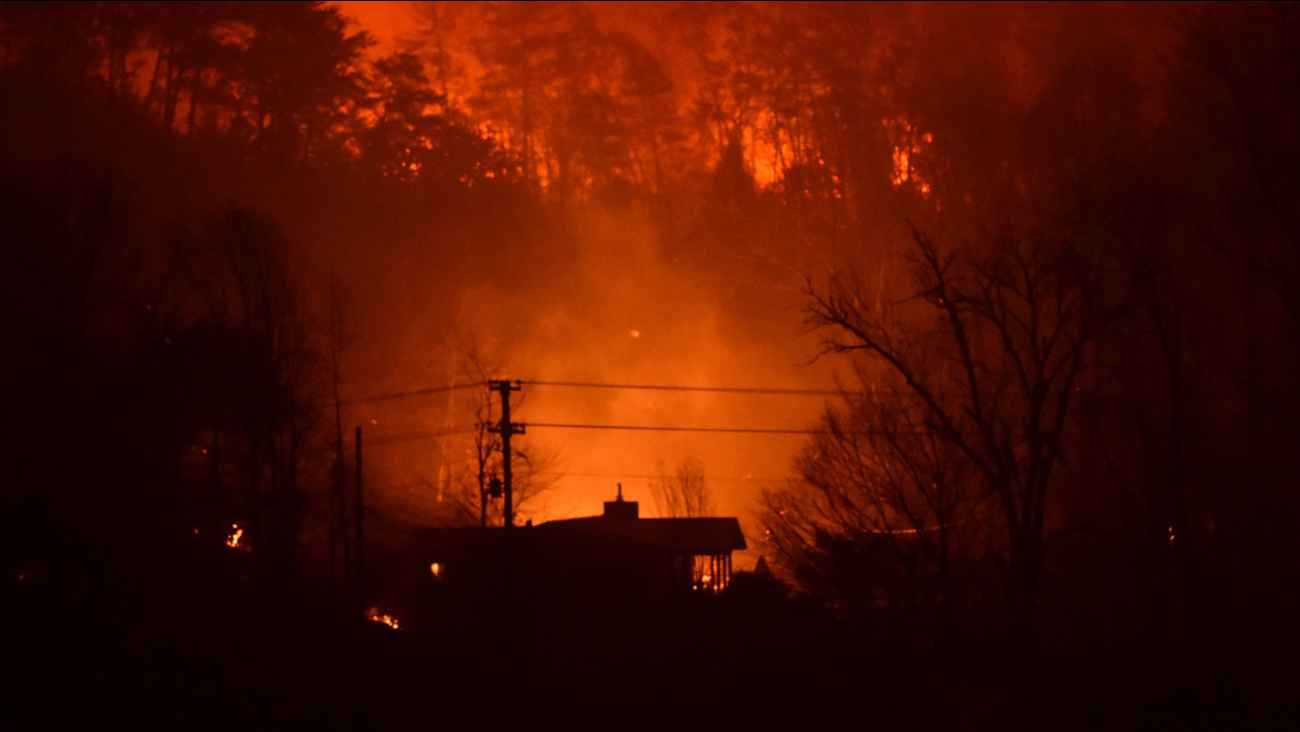 PIGEON FORGE, Tenn. -- Wildfires fueled by high winds killed three people near the Great Smoky Mountains and authorities went door to door Tuesday to check on the well-being of residents and visitors of the popular tourist area.

The fires burned to the doorstep of the Dollywood theme park, destroyed a resort and chased thousands of people from their homes.

National Guard troops arrived to help overwhelmed firefighters, and Mother Nature provided a little relief as the winds calmed and rain fell in some areas. Forecasters said it would not be enough to end the relentless drought that has spread across the South and set the stage over the past few weeks for wildfires in Tennessee, Georgia and North Carolina.

Linda Monholland, who was working at Park View Inn in Gatlinburg, said it was about 9 p.m. Monday when she left her workplace with about five other people. Surrounded by flames the whole way, they walked for about 20 minutes to a trolley to evacuate.

"There was fire everywhere. It was like we were in hell. Hell opened up," said Monholland, who was staying Tuesday at Rocky Top Sports World, an 80-acre sports facility that has been turned into a shelter. "Walking through hell, that's what it was. I can't believe it. I never want to see something like that again in my life, ever."

"We have not been able to get in all of the areas," Gatlinburg Fire Chief Greg Miller said. "We pray that we don't experience any more fatalities but there are still areas that we are trying to get to because of down trees and down power lines."

Photos of the popular tourist area showed scorched cars and buildings, and soot-covered debris littered across roads in the Gatlinburg area. A smoky haze hung in the air, obscuring picturesque views of mountains in the fall, awash in trees with leaves of red, yellow and gold.

Firefighters were still battling hotspots and a few structural fires, and officials were keeping an eye on strong winds forecast for Tuesday night.

"We've got some pretty ominous forecasting for this evening. Sixty mile an hour winds are forecast several hours ahead of more rain. So we may spend a lot of this evening fighting more fires," Miller said.

"There were times last night that we had wind gusts in excess of 87 miles an hour. That is hurricane force. That is nowhere to be when trying to fight a fire," Miller said.

Hundreds of homes and other buildings, including a 16-story hotel, were damaged or destroyed.

Emergency officials ordered evacuations in downtown Gatlinburg and Pigeon Forge and in other areas of Sevier County near the Great Smoky Mountains. About 14,000 residents and visitors were evacuated from Gatlinburg alone.

About 1,200 people took shelter at the Gatlinburg Community Center and the Rocky Top Sports Park.

At least a dozen people were taken to hospitals, including some with burns.

Evacuees dodged fire on foot and in cars to reach shelters.

At about 9:30 p.m. Monday, Tammy Dillon had just gotten home from work when police banged on her door and told her to get out.

Dillon said she drove through a fiery scene to get to Rocky Top Sports World, where she spent the night in a car and used the shelter for the bathroom.

"We drove through flames, over hot embers in the road. It was awful," Dillon said.

In downtown Gatlinburg, workers at Ripley's Aquarium of the Smokies had to flee because of the wildfires and left behind more than 10,000 fish and other animals. Police escorted a team of marine biologists and life support experts back into the aquarium Tuesday morning, and the animals were doing fine, Ripley's said in a news release.

Based on preliminary surveys, the Westgate Smoky Mountain Resort & Spa in Gatlinburg "is likely entirely gone," the Tennessee Emergency Management Agency said in a news release. The agency had previously said it had reports that the Ober Gatlinburg amusement park and ski area had been destroyed as well, but later said resort officials had checked in and said the property was fine.

Officials with Dollywood, the amusement park named after country music icon Dolly Parton, said the theme park wasn't damaged, but more than a dozen cabins operated by the park had been.

Dollywood suspended park operations at least through Wednesday. Its DreamMore resort will be open on a limited basis as a shelter and for registered guests.

Just hours before the fires spread, the singer appeared in a 30-second video released by the Great Smoky Mountains National Park, telling people to avoid burning leaves and parking vehicles on dry grass, and warning that even a campfire can spark a wildfire.

Parton is a native of Sevier County, which includes both Gatlinburg and nearby Pigeon Forge.

In the mid-1980s, Parton partnered with the Herschend family who ran the park, then known as Silver Dollar City. It opened under the new name of Dollywood in 1986.

"I am praying for all the families affected by the fire and the firefighters who are working so hard to keep everyone safe," Parton said in a statement. "It is a blessing that my Dollywood theme park, the DreamMore Resort and so many businesses in Pigeon Forge have been spared."