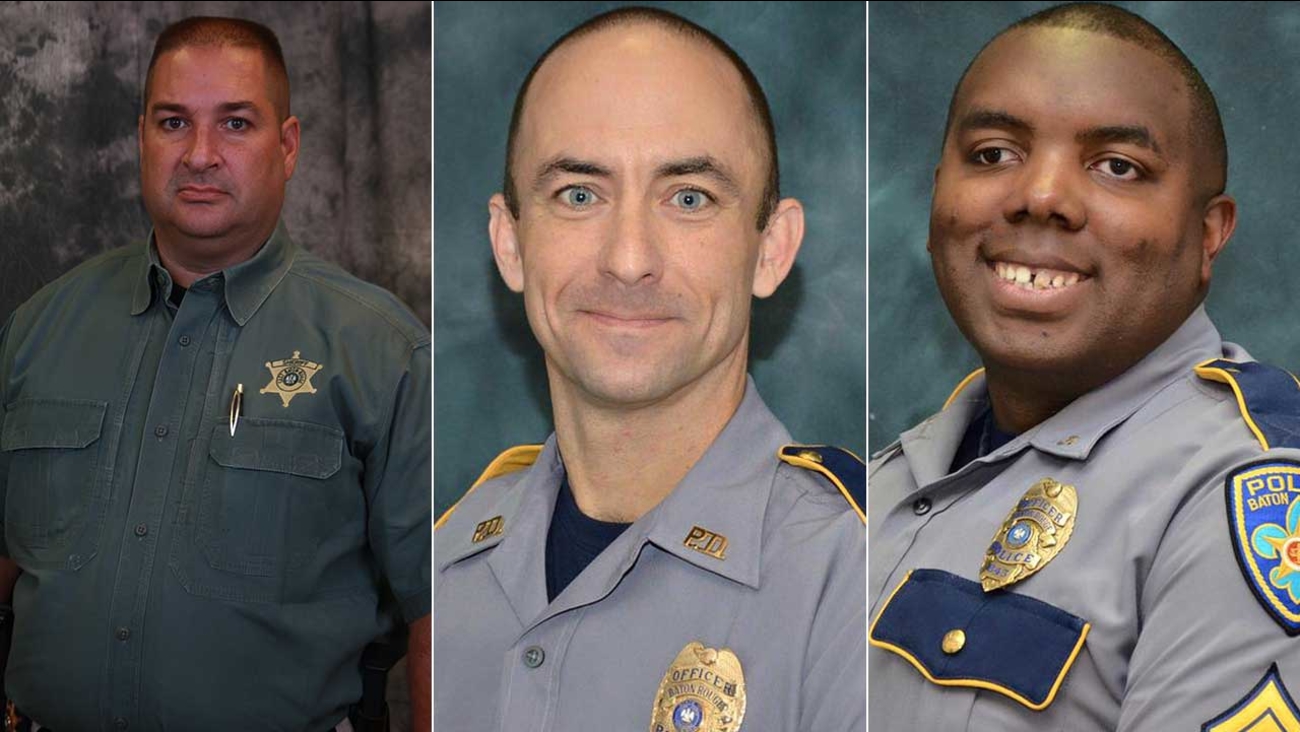 BATON ROUGE, La. (WTVD) -- A gunman and three officers he killed in Baton Rouge Sunday morning have been identified. In all, three officers were killed and three others injured in the latest violence between police and civilians.

Long, a former Marine who started duty in August 2005 and was discharged five years later in 2010, was shot and killed at the scene.

Law enforcement sources told ABC News that federal authorities are currently looking into what ties -- if any -- Long may have with the Moorish Science Temple of America. This is an anti-government movement and group that has long been under FBI scrutiny.

Long had his cell phone on him at the time he was killed. Investigators have the phone and are scrubbing it for new leads, including of course any potential associates. At the same time, authorities are trying to nail down how and when he got to Baton Rouge from Missouri, how many other weapons he may have recently obtained and where he got them, and sources told ABC News authorities are "ripping through his social media."

Authorities initially believed that two other assailants might be at large, but hours later said that no other active shooters were in the city.

The attack began just before 9 a.m. at a gas station on Airline Highway. The slain shooter's body was next door, outside a fitness center. Police said they were using a specialized robot to check for explosives near the body.

A Louisiana state representative has identified one of the three officers killed Sunday as Montrell Jackson. He said Jackson had a 4-month-old child. James said he knows Jackson and his family personally and spoke to the family earlier Sunday.

Courtesy of Trenisha Jackson via AP

Of the two who survived the shooting, one was in critical condition and the other was in fair condition. Multiple police vehicles were stationed at the hospital, and a police officer with a long gun was blocking the parking lot at the emergency room.

One officer was sent to Baton Rouge General Medical Center and was being treated for non-life-threatening injuries, spokeswoman Meghan Parrish said.

Gov. John Bel Edwards asked the public to pray for the officers involved and their families.

"Rest assured, every resource available to the State of Louisiana will be used to ensure the perpetrators are swiftly brought to justice," Edwards said in a statement.

Edwards spoke with President Obama, who offered support and condolences for those affected by the shooting.


Obama released a statement Sunday afternoon in addition to his press conference.

"For the second time in two weeks, police officers who put their lives on the lines for us every day were doing their job when they were killed in a cowardly and reprehensible assault," the statement said in part. "These are attacks on public servants, on the rule of law, and on civilized society, and they have to stop."

JUST IN: Pres. Obama issues statement on #BatonRouge shooting: These attacks "have to stop." pic.twitter.com/O5PVYgAzE2

The White House has been in contact with local officials in Baton Rouge and offered any assistance necessary.

"There is no place in the United State for such appalling violence, and I condemn these acts in the strongest possible terms. I pledge the full support of the Department of Justice as the investigation unfolds. Our hearts and prayers are with the fallen and wounded officers, their families, and the entire Baton Rouge community in this extraordinarily difficult time."

AG Loretta Lynch on #BatonRouge shooting: "There is no place in the United States for such appalling violence." pic.twitter.com/ZcjVWLXP7n

Mayor Kip Holden told ABC News that police were responding to reports of shots fired when someone opened fire on them.

The Louisiana GOP delegation issued statement from Cleveland, saying in part, "We will stand united and prayerful against evil."

LA GOP delegation issues statement from Cleveland on #BatonRouge: "We will stand united and prayerful against evil" pic.twitter.com/KK9sbQgEPd

"This tragic incident involving the killing of police officers in Baton Rouge is another example of the danger our law enforcement officers face every day in communities across our nation. Ann and I are praying for the families of these fallen officers who were murdered while simply doing their job. Now more than ever it is time to show our support for those men and women in law enforcement who put their lives on the line every day to protect us."

Our hearts are heavy again. We stand with you Baton Rouge. @BRPD pic.twitter.com/zchO4YPtsU

Police-community relations in Baton Rouge have been especially tense since the killing of 37-year-old Alton Sterling, a black man killed by white officers earlier this month after a scuffle at a convenience store. The killing was captured on cellphone video and circulated widely on the internet.