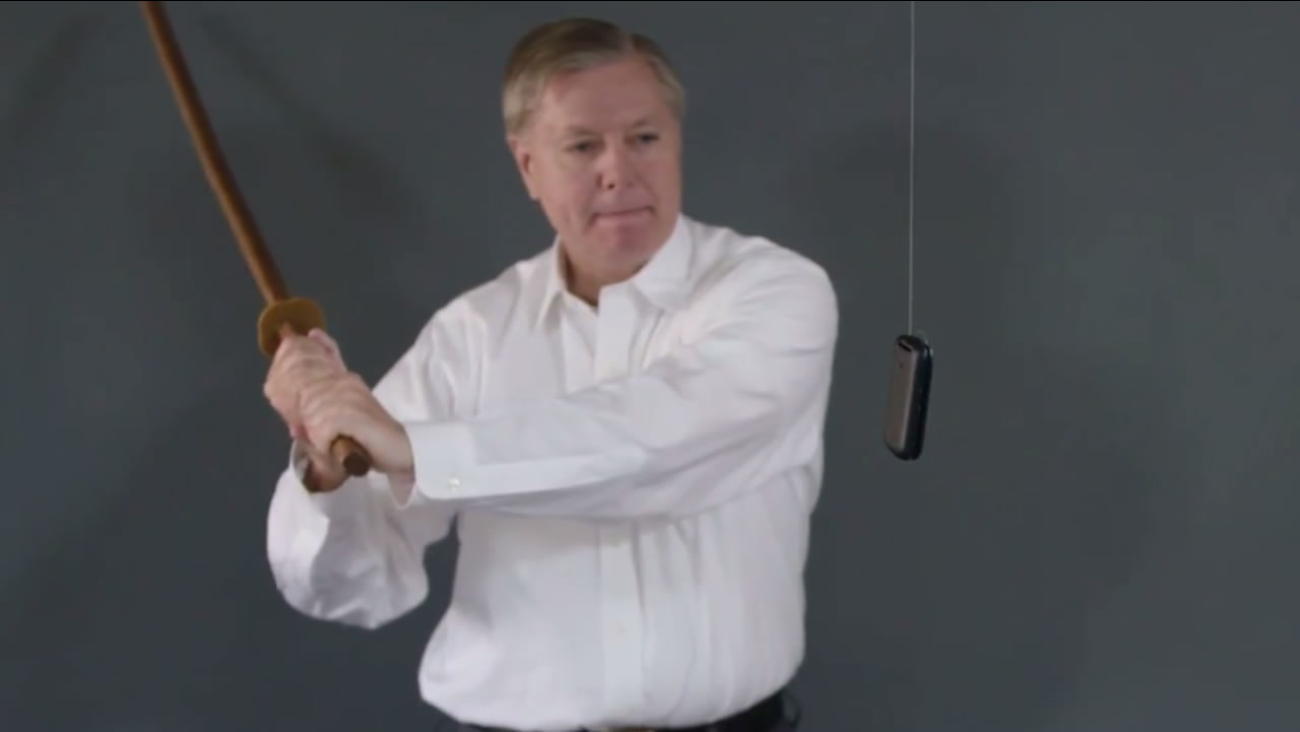 In the video entitled "How to destroy your cellphone with Lindsey Graham" released by the conservative media outlet, IJReview, Graham attacks a flip phone with a knife, golf club, sword and more, puts it in a blender, sets it on fire and drops it from a roof.

"If all else fails, you can always give your number to The Donald," Graham says.


The incident with Trump demonstrated the billionaire's taste for payback against those who criticize him. He gave out Graham's personal cell phone number to a crowd and TV audience, resulting in jammed voicemail for the senator.

This was after Graham called Trump "the world's biggest jackass."

But others aren't laughing.

Republican presidential contender Rick Perry branded Donald Trump's candidacy a "cancer on conservatism" Wednesday in the strongest denunciation yet of the billionaire's provocations in the campaign.

Perry's blistering criticism came after Trump announced plans to visit the Mexico border, a flashpoint in the primary contest ever since he declared that immigrants from Mexico are rapists and drug dealers.

Trump's announcement signaled there would be no backing down - indeed, a possible further escalation - in his feud with presidential rivals and other figures in the party. That feud was sparked by his comments about immigrants last month and accelerated when he mocked Arizona Sen. John McCain's experience as a tortured prisoner in the Vietnam War.

The Republican field was at first halting in responding to Trump's comments, but contenders reacted when he insulted McCain, with several saying Trump was not fit to be president. Now Perry, a former Texas governor, has taken the pushback further.

"He offers a barking carnival act that can be best described as Trumpism: a toxic mix of demagoguery, mean-spiritedness and nonsense that will lead the Republican Party to perdition if pursued," Perry said in a speech in Washington hosted by a super political action committee supporting his campaign.

"Let no one be mistaken," Perry said, "Donald Trump's candidacy is a cancer on conservatism, and it must be clearly diagnosed, excised and discarded. It cannot be pacified or ignored, for it will destroy a set of principles that has lifted more people out of poverty than any force in the history of the civilized world - the cause of conservatism."

Trump plans to travel to Laredo, Texas, on Thursday, where he will hold a news conference at the border, meet members of the union that represents Border Patrol agents and speak to law enforcement officers, his campaign said.

Florida Sen. Marco Rubio, another contender, told Fox News on Wednesday that the country needs a president who "restores dignity and class to the White House" and that Trump is not worthy of the office.

Other rivals commented on the furor, too.

Campaigning in Nashville, Tennessee, Wisconsin Gov. Scott Walker said he's not concerned by Trump's prominence in the race. "I used to run track and I ran the half mile," he said. "I realized there were some folks sprinting out ahead. I made sure I was ahead at the end of the race when it really mattered."

Jeb Bush, in South Carolina, was asked about the coming primary debates, for which Trump is expected to qualify based on his performance in polls. "This will be a first for me," Bush said, "so I'm not certain how all this plays out."

A day earlier he said Trump's rhetoric is "divisive, it's ugly, it's mean-spirited," but people who support him have "legitimate concerns about the country."

Meanwhile, federal regulators made public information about Trump's wealth and financial holdings Wednesday, showing he holds leadership positions in more than 500 business entities, has assets of at least $1.4 billion and debt of at least $240 million. The forms don't pinpoint his fortune, which he's said is more than $10 billion, because they report figures only in broad ranges.

But the disclosure, required of all candidates, underscores his unparalleled potential financial staying power in a longshot campaign that is roiling the GOP field.

In a speech Tuesday to hundreds of supporters in Bluffton, South Carolina, Trump kept on McCain, accusing him of being soft on illegal immigration.

"He's totally about open borders and all this stuff," Trump said.

McCain roused Trump's temper last week when the senator said the businessman's inflammatory remarks about Mexican immigrants had brought out the "crazies."

Graham, a McCain friend and one of the 16 notable Republicans running for the presidential nomination, betrayed the growing exasperation and anger of many in the party when he appeared Tuesday on "CBS This Morning."

"Don't be a jackass," Graham said. "Run for president. But don't be the world's biggest jackass."

He said Trump had "crossed the line with the American people" and predicted this would be "the beginning of the end with Donald Trump."

Trump responded during his speech by calling Graham an "idiot" and a "total lightweight," then held up a piece of paper and read out the senator's cellphone number to the capacity crowd of 540 people and the TV audience. He said Graham had given him the number several years ago.

"Give it a shot," Trump encouraged. "He won't fix anything, but at least he'll talk to you."