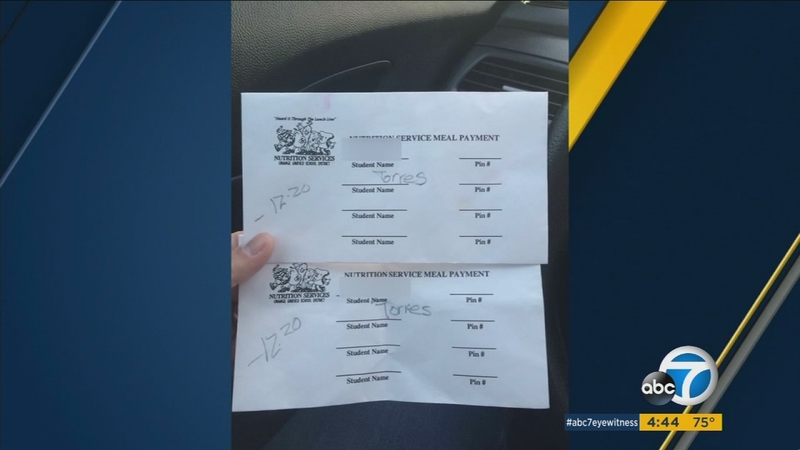 ORANGE, Calif. -- An outraged parent's social media post has gone viral after her two young sons were denied lunch entrees in their school's cafeteria due to an unpaid bill of $24.40.

"The lunch lady took away our food because she said we had to pay for it," Vanessa Torres' 11-year-old son told her after she picked him up at Taft Elementary in the city of Orange.

The two children said their main entrée's had been taken off of their plates, leaving them with milk, vegetables and fruit. They each gave their mother a note from the cafeteria, showing an unpaid balance of $12.20.

"It's absurd," Torres said in an interview. "I mean, how can you do that? That could have easily been your child, your grandchild, your niece, your nephew."

Torres said the boys had transferred from another district where they received free lunches, adding that she sent the boys to school with cash, but it was never taken.

Her 9-year-old said he asked an employee at Taft Elementary for an entree.

"I told her, 'If I could get one more chance," the boy recounted. "She said no."

Torres insisted the situation should have been handled differently, and that school officials should have contacted her. She posted an account of the incident online, where it has since gone viral and was shared using the hashtag #abc7eyewitness.

"I could have gone out of work, taken something to eat to my kids or even paid off the balance then," the mother said.

The Orange Unified School District described the incident as a mistake and released a statement:

"Nutrition Services staff apologized to the parent as soon as they became aware of the situation. The employee who was working the lunch line has been provided training to make sure that this doesn't happen again. It is not our policy to ever deny a child lunch, even if their account is temporarily outstanding."

Torres said she hopes "it never happens again, because no child should ever be left without eating anything at school."
Related topics:
orangeorange countymotherhoodsocial media#abc7eyewitnessschool lunchviral
Copyright © 2021 KABC-TV. All Rights Reserved.
#ABC7EYEWITNESS