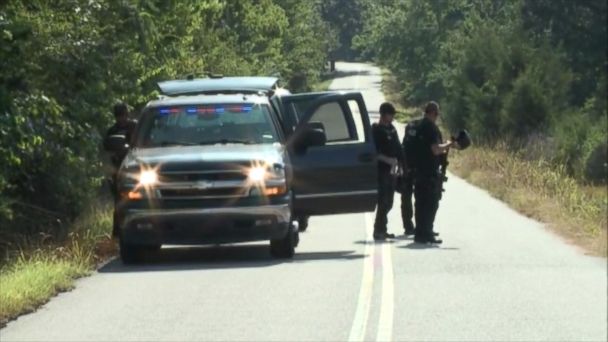 An Arkansas man who wanted to cause a "ruckus" ahead of a court hearing shot and killed a sheriff's deputy Wednesday, and wounded a small-town police chief, before surrendering to law enforcement officers who had surrounded his rural home, a sheriff said.

Sebastian County Deputy Bill Cooper was pronounced dead about 1:15 p.m. after being shot in the neck, Sheriff Bill Hollenbeck said during a news conference. Hackett Police Chief Darrell Spells suffered superficial wounds after apparently being grazed by a bullet.

Billy Monroe Jones, 34, had gone to his father's house earlier Wednesday to take some tools, Hollenbeck said. According to the sheriff, Jones pointed a gun at his father, who called 911. Cooper and Spells were among officers who found Jones with a rifle and body armor when they went to his home east of Hackett, near the Oklahoma border.

"Jones wanted to cause what was told to us as a 'ruckus' and he was due in court in Fort Smith regarding a petition to revoke a suspended sentence charge," Hollenbeck told reporters.

Court records show Jones has had a drug conviction in state court along with a handful of minor charges, such as speeding and public intoxication, in nearby Greenwood.

After the shooting, the suspect barricaded himself inside his house for more than 4 hours before being arrested. Dozens of police vehicles clogged Arkansas 253, a two-lane road that runs through a mix of woods and fields east of Hackett. The town about 115 miles west of Little Rock has around 800 residents.

James Markward, 72, who lives nearby, said he heard the commotion early Wednesday.

"It woke me up this morning, the gunshots. Of course I didn't know what was going on," Markward told The Associated Press in a telephone interview. "My neighbor called me and asked if I was shooting, and I said, 'No, not me.'"

Markward said Jones once helped him split wood, but said he hadn't seen the man in a few years.

During the encounter, Jones shot at and damaged a police robot providing surveillance to the responding officers, Hollenbeck said. In the commotion, a police dog was shot and ran into the woods and remained missing later Wednesday.

Hollenbeck said the sheriff's office was "certainly looking into" whether the shooting was a planned attack.

"The investigation is ongoing. It certainly was an extremely violent situation that came out of nowhere," the sheriff said.

Gov. Asa Hutchinson mourned the loss, which comes after the deliberate shootings this summer of police officers in Dallas and Baton Rouge, Louisiana.

"Today's shooting incident ... tragically illustrates the dangers our law enforcement officers face each and every day to keep us safe," Hutchinson said in a statement.

Hollenbeck said Cooper was around age 65 and "about ready to retire."

"He was a perfect example of how we all want our law enforcement officers to be when it comes to relationships with our community," Hollenbeck said.