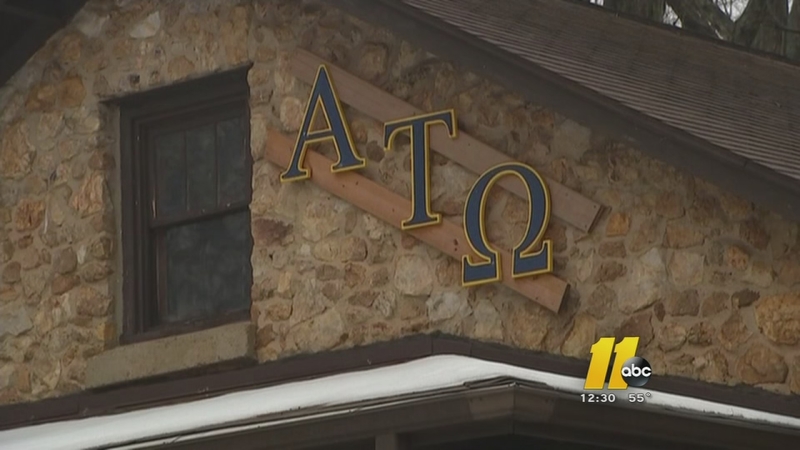 RALEIGH (WTVD) -- An NC State coed claims she was sexually assaulted at a fraternity house over the weekend.

Campus police sent out an alert saying that the woman reported being assaulted at the Alpha Tau Omega fraternity house early Sunday morning. Police haven't said any more about the alleged crime.

The CEO of ATO National Wynn Smiley said the fraternity leaders don't believe the allegation. They say while cooperating with authorities they have also conducted their own investigation.

"The person who's making the allegations was at another party on campus not related to ATO, and, at some time during the evening, had come over to the ATO house," said Smiley. "At the time there were seven or eight, less than 10 men, in the chapter house just sort of hanging out. And she spent some time there, as we understand it, sitting on a couch. Then some point later that evening, a friend of hers came and picked her up."

He added, "Early that next morning, six in the morning, another friend came over to the house and said this woman was saying that she may have been sexually assaulted and confronted the men in the house. And they said 'We don't know what you're talking about.'"

NC State students have expressed mixed reactions, but the ones we spoke with all say they hope investigators will soon find out the truth.

"Many times, you know, people lie about that but other times it's true," said NCSU Student Jonathan Roman. "So they should definitely do something about it. But, you know, get a little more like, a little more like knowledge about the situation, you know, because I don't think it's clear right now. And no one thinks it's really clear."

"It's kind of weird. It doesn't really happen often. At least it's not reported often," said NCSU student Megan Lord. "I don't know if it happens more, more than it's reported."

An alleged sexual assault last semester at another NC State fraternity is apparently still under investigation.

Smiley said while the fraternity's initial investigation makes him believe the allegation is false, he's still open to more information.

"What we found out doesn't mean that we're not taking the allegation seriously. We are taking it very seriously. We're cooperating with the authorities and our investigation is still ongoing," said Smiley. "and so there may be new information that comes up that would suggest something other than what we know now."

In that case, Smiley said any member found guilty or responsible for a sexual assault would be kicked out of the fraternity.

"Any member of ATO that is found responsible or guilty of sexual assault would certainly be separated from the fraternity. We just, we have zero tolerance for that kind of behavior. It's an abhorrent crime," said Smiley.