WTVD
By with ABC News and the Associated Press
BRUSSELS (WTVD) -- Multiple explosions rocked Brussels on Tuesday at the airport and in the city's subway system - prompting a lockdown of the Belgian capital and heightened security across Europe.

The Islamic State group has issued an updated communique taking credit for the Brussels attacks and threatening other countries taking part in the anti-IS coalition.

The statement promises "dark days" for countries allied against the Islamic State, threatening that "what is coming is worse and more bitter."

The communique was published in Arabic and French, and an English translation was provide by the SITE Intelligence Group, which monitors jihadi websites.

IS also released photos purportedly showing its fighters in Syria giving out candy to children to celebrate the Brussels attacks, according to SITE.

The Islamic State group said its members detonated suicide vests both at the airport and in the subway, where many passengers fled to safety down dark tunnels filled with hazy smoke from the explosion in a train pulling away from the platform.

NEW: State Dept "alerts U.S. citizens to potential risks of travel to and throughout Europe" after #Brussels attacks pic.twitter.com/A0YzTxk9cM

U.S. citizens should exercise vigilance when in public places or using mass transportation. Be aware of immediate surroundings and avoid crowded places. Exercise particular caution during religious holidays and at large festivals or events.

The blasts have killed at least 34 people and put the Belgian city on its highest terror alert level.

Mayor Yvan Majeur said at least 20 people have died and 106 people were injured in the attack on the Maelbeek subway station, which is close to the European Union headquarters.

Other officials said 14 people were killed and 81 were wounded in twin explosions at the Brussels airport.

That puts the total number of injured at 187.

JUST IN: Pres. Obama orders flags to be flown at half-staff until March 26 after #Brussels attacks. pic.twitter.com/m9IdBZu0Tg

Brussels police called in a statement late Tuesday for help from "anyone who has amateur film where the attackers may be in view and could help move their investigation forward."
Prime Minister Charles Michel said the country will tighten security at its borders. He declared three days of national mourning after what he says were probably the most tragic attacks the country has seen in peacetime.

ABC News reports three Mormon missionaries from the U.S. serving in Paris were seriously injured in the airport attack. It also said a U.S. service member five family members of that person was hurt. They were not identified. The U.S. embassy was working to learn if any other Americans are hurt.

The U.S. Air Force issued a statement Tuesday afternoon confirming one USAF service member, from Joint Force Command Brunssum in the Netherlands, and his family were injured in the attack.

The Air Force said the family "sustained various injuries" but would not elaborate, citing privacy concerns.

A UNC-Chapel Hill graduate and native of Spain, Ignacio Iturrate is now working in Belgium and narrowly missed being in the midst of the terror attacks. He spoke with ABC11 via Skype.

See the video below for the full interview:

Former UNC student Ignacio Iturrate speaks from Brussels, where he narrowly missed being in the midst of a terror attack.

Police circulated photos of the suspected bombers and said they were actively looking for one of them. The two others apparently died in the suicide attack. Law enforcement officers were staging raids across the country.

Florence Muls, a spokeswoman for the Brussels Airport, said a third bomb was neutralized at the airport. Muls told The Associated Press the third bomb was dispensed of "with a controlled action" once the chaos of the first explosives had eased somewhat. Elsewhere in the Belgian capital, anti-bomb squads detonated suspicious objects in at least two locations - the Maelbeek subway station and close to Brussels University a few miles further away. Authorities said those two did not contain explosives.

A U.S. official has told the AP the explosives in Brussels appear sophisticated, and investigators will examine them to see if they bear the same characteristics to those used in the Paris attacks last year.


There were two explosions in the departure hall of the city's Zaventem international airport, according to Prime Minister Charles Michel. There was also an explosion on the rail tracks at the subway station, according to a spokeswoman for Brussels transportation department.

This was the scene a short while ago, between the Arts-Lois and Maelbeek metro stations in Brussels. pic.twitter.com/aTZjqsF7Gt

ABC11 spoke with Tim Nichols, a Duke University counterterrorism expert to discuss the attacks and the scenarios that may unfold in their wake.

Watch the video below for the full interview:

An interview with a Duke expert on the Brussels terror attack.

Passenger Cedric Vanderswalm says a late train and a full elevator at Brussels airport probably saved his life. The 20-year-old from the coastal Belgian town of Knokke was at the Brussels airport on Tuesday planning to fly to London for his job as an animator. He says was heading to the airport's departures level but the elevator was full "so I didn't get in. I waited and I was about to step into the elevator when there was a big explosion." He says people started running, dropping their luggage. He says "if I had taken the previous elevator, I would have been right in the explosion. My train also had a 5 minute delay, so I was lucky." The explosion coated the left side of his face with soot and dust.

"We are at war," French Prime Minister Manuel Valls said after a crisis meeting called by the French president. "We have been subjected for the last few months in Europe to acts of war."

German police say three Kosovars who are suspected of possible links to an extremist network have been arrested on a highway in the south of the country.

The state criminal police office in Bavaria confirmed a report by broadcaster Bayerischer Rundfunk that the three were arrested early Tuesday on the Munich-Salzburg highway, news agency dpa reported.

According to the report, they were in a Belgian-registered car. However, the criminal police office said that there are no indications at this point of any link with Tuesday's attacks in Brussels.

European security officials have been bracing for a major attack for weeks, and warned that the Islamic State group was actively preparing to strike. The arrest Friday of a key suspect in the November attacks in Paris heightened those fears, as investigators said many more people were involved than originally thought, and that some are still on the loose. Officials said there was no immediate evidence linking key Paris suspect Salah Abdeslam to Tuesday's attacks. After his arrest Friday, Abdeslam told authorities he had created a new network and was planning new attacks. 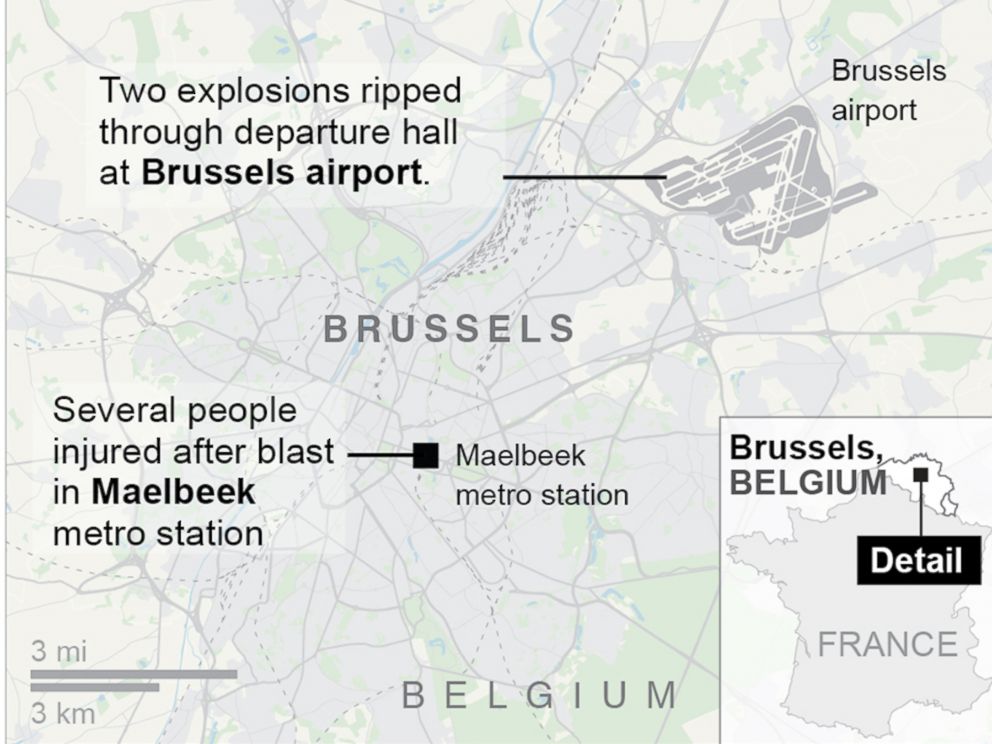 President Obama, while on a trip to Cuba, said "We will do whatever is necessary to support our friend and ally Belgium."

Some of Europe's best-known monuments have been illuminated with Belgium's national colors in a show of solidarity after the attacks in Brussels.

At nightfall Tuesday, the Eiffel Tower in Paris lit up in the black, yellow and red colors of the Belgian flag.

Berlin's landmark Brandenburg Gate, which after the November attacks in Paris was illuminated with the French colors of red, white and blue, also was lit up in Belgian colors. A few blocks away, some people laid flowers and lit candles outside the Belgian Embassy.

And in Italy, Rome's Trevi Fountain joined in the show of Belgium's national colors. 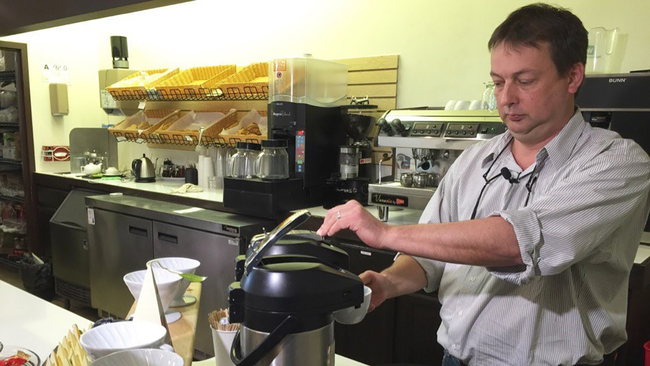 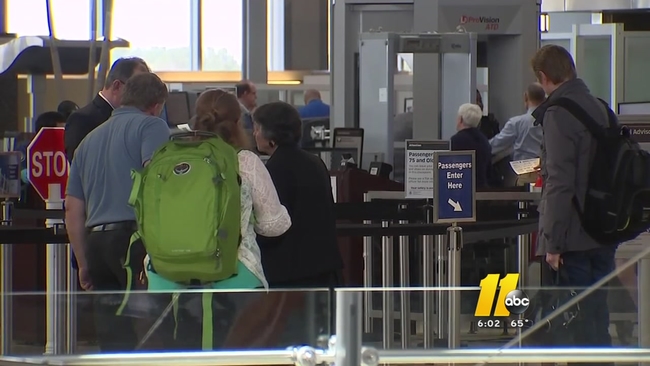