WTVD
FORT BRAGG, N.C. (WTVD) -- Senator Thom Tillis is fighting to keep the air in Airborne. The Department of Defense said Tuesday an amendment has been added to its budget to keep C-130 aircraft at Fort Bragg's Pope Army Airfield.

The addition would mean the Air Force can't move a dozen of the transport planes from Pope without the permission of top Army and Air Force commanders in North Carolina and the Pentagon.

The C-130s have long been a common sight in the skies over Ft. Bragg and surrounding communities.

Army commanders say the aircraft is crucial to military airborne training and readiness. It's been a major part of numerous deployments. The Air Force wants to deactivate the 440th Airlift Wing at Pope and use aircraft from other bases as needed.

But in a statement Tuesday, Senator Tillis said "maintaining the C-130 presence at Fort Bragg's Pope Airfield - the busiest airfield in the world for tactical aircraft training - is not only critical to our military readiness, but to protecting our troops and all Americans".

"It's about defense and readiness. The bottom line: it's not about whether we like what happens out there. We don't want anyone to go to war, but we have to be ready, because when the world calls 911, the phone number is answered here, and we can't be waiting for someone to get in here from Little Rock, Arkansas to make it work," said George Breece with the NC Military Affairs Commission.

Bowing to political community pressure, the Air Force has delayed plans to deactivate the 440th and its dozen C-130's until next year.

The President has the final say so. He can sign or veto the National Defense Authorization Act - which is basically the Defense Department's budget. 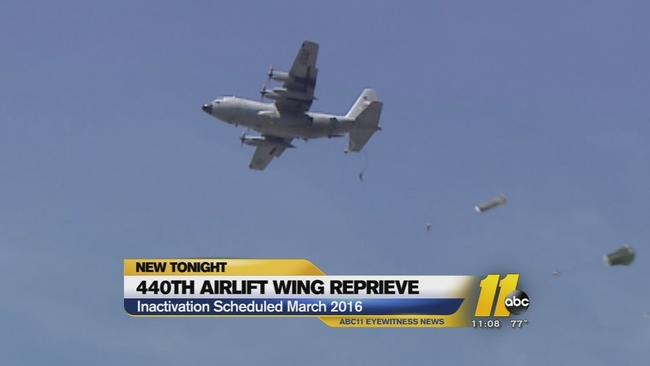