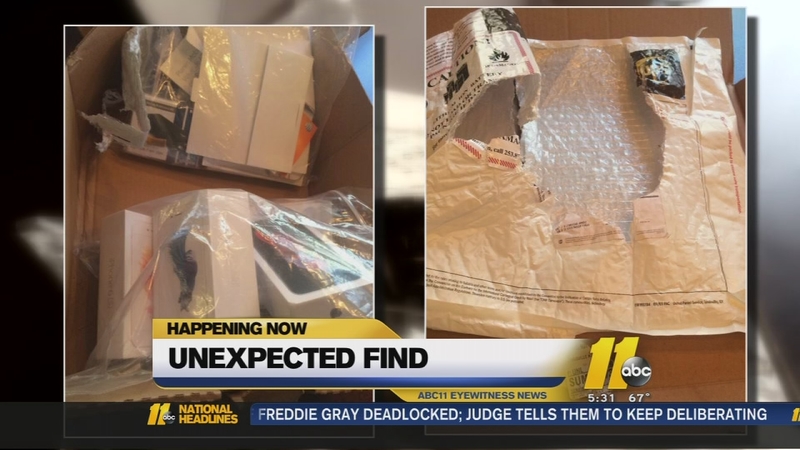 CARY, NC (WTVD) -- It was too big of a box. That was the first give-away. The UPS box was big enough to hold a computer (and accessories); what they'd ordered were earrings.

The earrings were inside the box, but they weren't alone. There were also gallon-sized Ziploc bags stuffed with garbage; specifically, three empty iPhone 6 boxes. They also found an extra battery, a few Apple earbuds, and the butt of a used cigarette in the box.

"I saw the iPhone cases inside and the ripped up packages and I knew that something big was going on," said the family's matriarch. "Probably, criminal activity."

The Cary family didn't want to be identified in case this turns out to be more serious than curious, but it is definitely that.

"It looks like someone had this planned," she said. "That they had clear Ziploc bags where they were going to hide the evidence and stuffed it in a large box."

Police told ABC11 the same thing they told the family. "They had no knowledge of any previous incident like this before."

But UPS says the company's security unit is looking into it and promises to work with police if a crime was committed.

"It bothered us because we knew people weren't receiving their iPhones," said the Cary mom. "I thought this is a pretty big crime. It doesn't look like a one-time thing. I would think someone has seen this happen before."