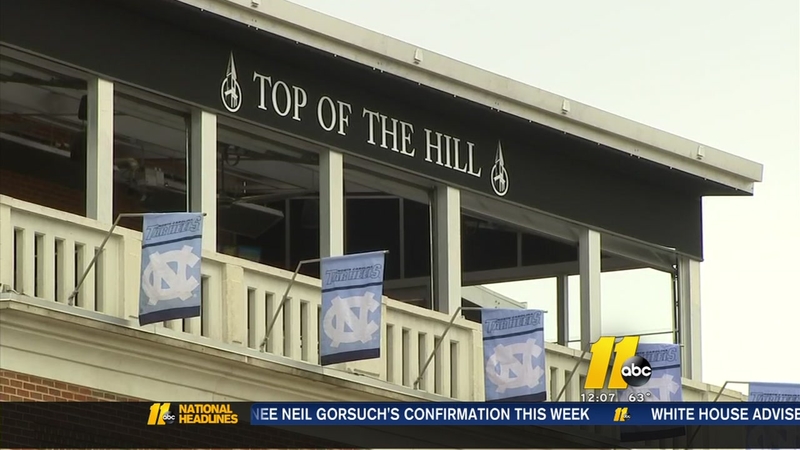 CHAPEL HILL, North Carolina (WTVD) -- Carolina pride is at a fever pitch ahead of the NCAA championship game. Chapel Hill stores have been inundated with fans looking for UNC gear and dozens of students are camping outside of the Top of the Hill to learn if they won a coveted table at the popular Franklin Street restaurant.

No more lines at @TheTopoftheHill for tonight's @NCAA championship game! Tickets for seats, all distributed. Updates this morning on #abc11 pic.twitter.com/XzCF2N97b5

"We'll get a few hours of sleep tomorrow afternoon, maybe go to a class or two, and then be to watch the game," said Somers.

The students want to be high above Franklin Street if the team wins and there's a celebration below.

Some graduates are back in town to watch the game.

Tracey Melnick, who now lives in Washington D.C., plans on attending the school's watch party at the Dean Dome.

"Last year, I watched the championship game in there and it was fantastic," she explained. "There's nothing like a college town. You can't mimic this [energy] anywhere."

As Chapel Hill prepares for Monday's national championship, they want to remind residents that there will be an increase in patrols and community safety measures.

"We want everyone to be able to enjoy the Tar Heels' repeat trip to the Final Four, and the key to that is safety," said Chapel Hill Police Chief and Executive Director for Community Safety Chris Blue. "Our goals are simple: We want no one hurt and no damage to property. We're all pulling for a Tar Heel victory, and when that happens, we want everyone to be able to return home safely."

The Chapel Hill Police Department has reached out to more than a dozen law enforcement agencies from around the region for assistance. They said there will be 250 police officers working Monday to enforce safety measures.

A traffic diversion plan will be in effect and those going downtown should expect delays.

Officials said drivers should take note of these changes:

If UNC wins, downtown streets may be closed to vehicles based on crowd size and behavior.

If streets are closed, no vehicular traffic will be allowed inside the closed area.

Closures may include the following:

Residential streets near downtown will be closed except to residents of those streets and their guests.

The Town of Chapel Hill said they will make every effort to keep people who are attending the event from parking in downtown neighborhoods. Access to neighborhoods in that area will be limited.

Authorities said barricades will begin in the early evening. They said when entering or leaving the area, residents should do the following:

Alcohol checkpoints will be in place, and DWI enforcement will take place throughout downtown.

Authorities want to remind residents that celebratory bonfires and people climbing on or up light poles and trees will not be tolerated.

Attendees have sustained serious burn injuries from jumping bonfires and major injuries have occurred when celebrants have fallen off of light poles. These practices are prohibited at all times downtown.