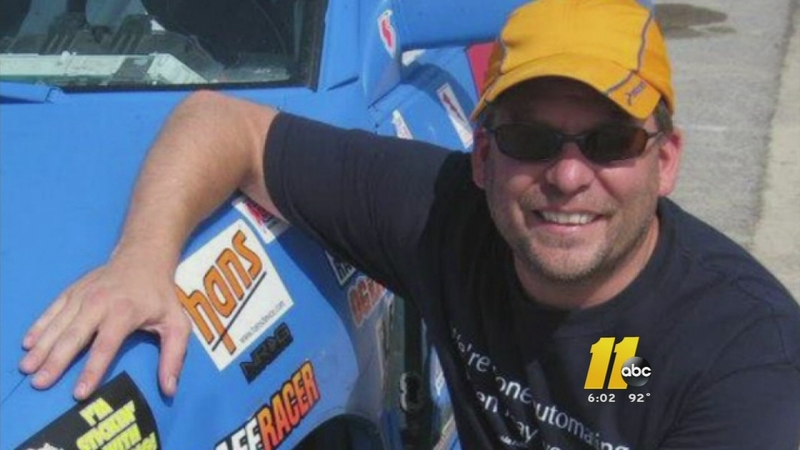 Coworkers grieve for man killed on I-540

RALEIGH (WTVD) -- 911 calls show the horror that drivers on I-540 felt Monday when they saw a car spin from the westbound lanes across the median and into the eastbound lanes.

CALLER: "It's a 2-door Honda Accord looks like it came across the median and struck a cyclist on a motorcycle."

CALLER: "There was a huge crash. I think it was a truck and what looked like a Honda sedan and a motorcyclist. The motorcyclist was hit, they collided there was a lot of dust and he just flew."

CALLER: "There's two nurses on the scene helping the gentleman but they didn't find a pulse. I literally saw him flip up in the air."

CALLER: "The guy who was driving the motorcycle is hurt very bad.. (crying)"

There were others but you get the point. This was a violent crash and it killed 44-year-old Phil Sabino.

He was on his motorcycle, heading home from the same Morrisville company he'd worked at for the past 17 years, a data management company called SciQuest.

"He is one of the most loyal nicest people you'll ever meet," said friend and co-worker Randi Seran. She had tears in her eyes - like everyone seemed to at SciQuest.

"He always went above and beyond," said Seran. "There was not anyone in the entire company that wasn't his friend or didn't like him. He was beloved. It was a hard loss for us today. It's been a tough day."

"We found out about it last night and just the reaction of grief has been surprising," Wiehe said through a sigh. "You know, the adage of good guys finish last. It's very applicable here because Phil was just a very good guy."

The accident is still something of a mystery.

Eyewitnesses say the Honda Accord, driven by 28-year-old Kanak Singh, was swerving in the westbound lanes of I-540 before it made a sharp left turn and crossed the median.

It flew through the median cables and popped up in the I-540 eastbound lanes, kicking up a huge amount of dust and coming to a stop in the middle of the highway.

Sabino ran right into it.

No charges have been filed against the driver, Kanak Singh. Police say they expect to file charges but are still investigating. ABC11 stopped by Singh's Raleigh home Tuesday. No one came to the door.

Sabino leaves behind a wife and 8-year-old daughter and, from his co-workers accounts, there never was a better family man.

"As devoted as he was to his work, he was equally devoted to his family," said Seran. "He is the best of the best. It does not get better."