WTVD
WAKE COUNTY (WTVD) -- Deliberations began Thursday afternoon in the trial of a teenager charged with killing a Wake County couple in 2013.

Prosecutor holding assault rifle in right hand points our Maria Mendoza shot in back while on floor. #SantillanTrial pic.twitter.com/hbEvPjgjQV

Throughout the trial, a parade of witnesses have tried to paint Jonathan Santillan as a ruthless killer.

Santillan, who was 15 at the time, is charged in connection with the deaths of Jose Samuel Flores Mendoza and Maria Saravia Mendoza, who were gunned down inside their house in the 700 block of Colonial Drive near Garner on Jan. 5, 2013.

Before the trial started Thursday, the judge denied a "suppression of evidence" motion, based on a composition book that the defense said contained handwriting that didn't match Santillan. The book was referenced during a video interview with investigators that was played for the jury this week.

Afterwards, closing arguments got underway with the prosecutor saying, "we are going to call it what it is - a cold blooded murder."

"This case has shocked us and horrified us ... What are we going to do about it," he said before resting just before noon.

Prosecutor: This is an "all or nothing case. He's either guilty or he's not." #SantillanTrial #ABC11Eyewitness pic.twitter.com/VCQYfHBWgW

The defense spent their entire closing pointing the finger at state's star witness, while asking for a not guilty verdict.

Santillan attorney trying to blame man who testified he was the getaway driver. #SantillanTrial #ABC11Eyewitness pic.twitter.com/UN1mY5YeX3

Moise Reyes told the jury last week that he drove Santillan and Israel Vasquez - who was 16 at the time and also charged - to the home where the Mendozas and their two young sons had moved when the teen's rival gang member moved out. The Mendozas' 3-year-old child was also in the home at the time of the killings, but was not hurt. The couple's older child was not at the house.

On the witness stand, several veteran investigators had called the crime scene - where a couple was killed in a case of mistaken identity - among the worst he's ever seen.

He also told jurors about ammunition he found at the home where Santillan was arrested. Blomgren said stamps on bullets had been scratched off - matching shell casings found at the duplex. Witnesses try to paint teen as a ruthless killer 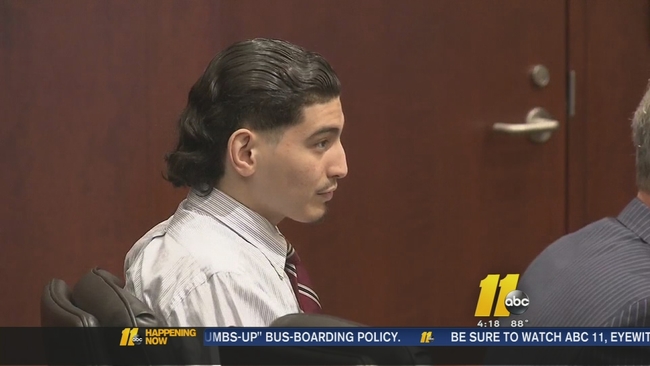