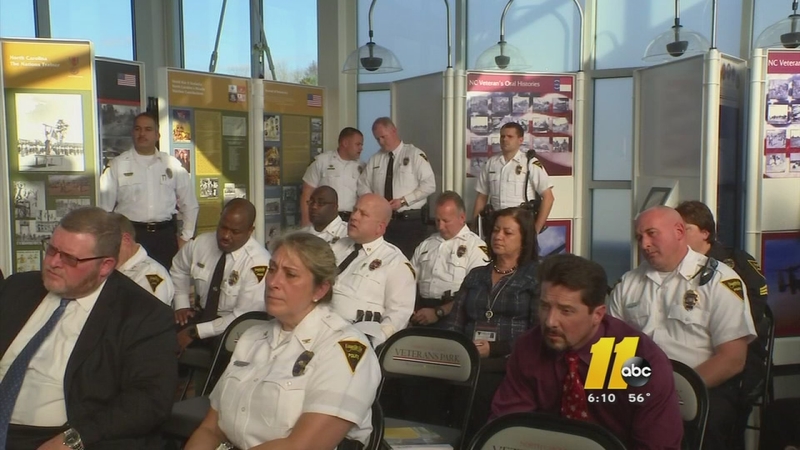 FAYETTEVILLE, N.C. (WTVD) -- A newly released Department of Justice report encourages the Fayetteville Police Department to tighten up and clarify its use of force policies, and get better at record-keeping.

That's the very short of a very lengthy report coming from the DOJ's Community Oriented Policing Services Division, or COPS. The report, which examines years 2013 and 2014, identifies 49 areas that need improvement, and is accompanied by 76 recommendations to do so.

The report came at the request of Police Chief Harold Medlock, shortly after his 2013 arrival to the city. During a Wednesday press conference in Fayetteville, COPS director Ronald Davis said Medlock basically stalked division heads at police conferences in an attempt to have them consider the request. Davis and other federal authorities said Medlock should be applauded for taking voluntary steps towards transparency, in an era that pre-dated the Ferguson, Chicago and Baltimore conflicts.

"This is not about how to go from being broke to being fixed," Davis said. "This is about, and I'll steal the words from the Chief, 'How to go from good to great.'"

Fayetteville is just the eighth police department in the nation to be surveyed through the reform initiative. Philadelphia and Las Vegas were among the first several years ago. Local leaders said they hope the city's move toward this type of transparency will set the tone for the 16,000-plus police departments across the country.

The Issues and the Solutions

Among the issues highlighted in the report was poor information flow between FPD and the State of Bureau of investigations. Surveyors said this tied back to what was included in reports involving conflicts with citizens, what was left out, and how it was all recorded.

"That in many cases hinders the department's investigative ability," Davis said.

Black drivers are still disproportionately pulled over as compared to other groups, although the report notes that figure has declined during the past several years.

And when it comes to the use of force, not only is FPD not keeping sufficient investigative records, but there are policies that need to be revised, according to the report.

For instance, the report warns against FPD firing warning shots, noting the danger to the public. It highlighted the fact that witness interviews are not sufficiently recorded in the case of deadly officer-involved shootings, and those should be video-recorded. There have been ten deadly officer-involved shootings in the past five years, surveyers noted.

.@FayettevillePD Chief Medlock: "There's nothing in this report that the FPD, @CityOfFayNC can't accomplish..." pic.twitter.com/qyoB4UZfcm

The report also picks apart when use of force is necessary. Sometimes, that question means the difference between legality and common sense, leaders said Wednesday.
"We can have an officer-involved shooting that can be completely legal, but it just sometimes doesn't feel right," Medlock said.

There's the flipside, as well.

Visibly disturbed, Medlock noted the five instances in six weeks when FPD officers had guns pulled on them by suspects, or suspects shooting when officers arrived on scene. By what Medlock called incredible restraint, wisdom, good training and leadership, those officers opted against shooting.

It's not an easy concept for everyone to swallow, he admitted.

"We have had pushback," Medlock said, responding to ABC11's question about how the department was taking insistence of de-escalating, even in the face of justified shooting scenarios. "There is frustration in the rank and file. I am scared to death, Nicole, for my cops."

Medlock also gets emotional: "I am scared to death, Nicole, for my officers." Says de-escalation is for protection of everyone involved

Davis noted that no one is suggesting police not protect themselves. He said all those involved recognize every situation is unique.

"If there's a criminal use of force, then officers should be held accountable. We all agree with that," Davis said. "But if there was a use of force, even though it was legal, that poor tactics contributed to (and) that could've been prevented, then the department has the obligation to make the kind of change [and] provide the kind of training and equipment so they can reduce all uses of force, not just excessive force."

"So to the extend that we can help the Chief do better investigations, we found that also to be very important," Davis said.

"We were a community concerned," he said.

That was when Voorhies arrived in 2012 from his post in Durham.

"There was not a clear path forward," Voorhies said. "We knew we needed [a chief] who fully understood and embraced community policing."

In came Medlock from his deputy chief position with the Charlotte-Mecklenburg Police Department. Fayetteville city mayor Nat Robertson admitted there was a bit of skepticism when Medlock announced he wanted to bring the feds in to evaluate, but that city council stood behind him in every way possible.

"It is kind of inviting your parents into your room to make sure it's clean enough," Robertson said of the COPS report process.

Community Policing has been Medlock's motto since arriving in 2013. He serves on a 21st Century Community Policing panel through COPS, and has been to the White House on more than one occasion to speak on the efforts and gains associated with the tactic. FPD holds a series of neighborhood-centric forums, "getting to know you" functions with citizens in the form of the Coffee With a Cop program, and the re-organization of officers assigned to specific neighborhoods. They've embedded themselves in Cumberland County Schools to talk candidly with young people about gun violence, and the role police play in the community.

Coffee with a cop in Fayetteville

They're all a part of what the recommendations outline when it comes to the community relations aspect of the report. The DOJ will help implement all the recommendations during the next six months, and come back a year and half later to evaluate how it's working.

"I think this will be a roadmap for the Department going forward," Davis said.

"There's nothing in this report that the FPD and the City of Fayetteville cannot accomplish in a reasonable amount of time," Medlock said.