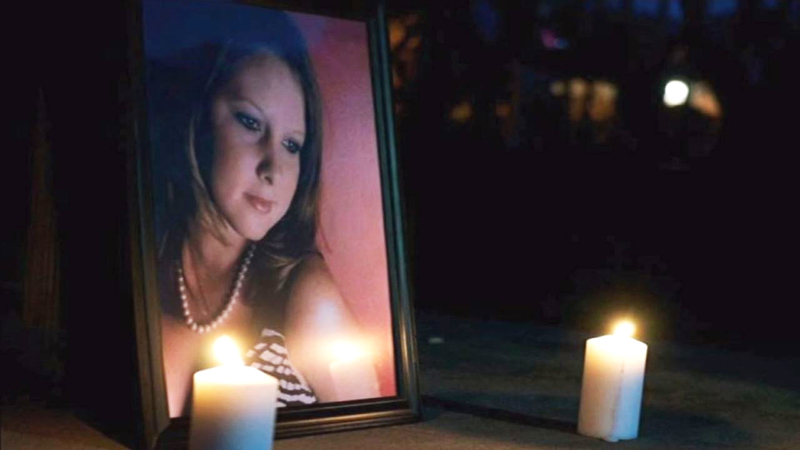 FUQUAY-VARINA, North Carolina (WTVD) -- A Wake County family is turning pain into action. Senate Bill 600 was filed on Tuesday and its title is 'Britny's Law.' It's named after Britny Puryear.

In November 2014, the 22-year-old Puryear was gunned down in her Fuquay-Varina home. Her then 5-month-old baby was in the home at the time. Investigators said the shooter was Puryear's boyfriend and father of the baby, Logan Connail McLean, who was 21 at the time.

In March 2016, McLean pleaded guilty to second-degree murder and received a sentence of 26 to 32 years in prison. The Puryear family said he only received that much because of a previous conviction.

"His sentence actually would have been lower but the way they charged him by charging him first for the felon with a gun," said Shelley Puryear, Britny's mom, "so that bumped him up to another degree."

Unhappy with McLean's sentence, the Puryear family is fighting to change the outcome for other victims.

'Britny's Law' is sitting in a rules committee at the legislative building among North Carolina lawmakers. If passed into law, it would make it easier to make a first-degree murder charge stick in cases of domestic-violence homicide. That charge would lead to stiffer sentences and life in prison.

Right now, prosecutors say there needs to be proof of premeditation for a first-degree murder charge.

"It only takes one juror to think it was a crime of passion," said Stephen Puryear.

It's amazing how unwilling juries can be to convict," said Sen. Jeff Jackson (D-Mecklenburg), when it comes to first-degree murder charges in domestic violence homicide cases. "There really is a gap in the law."

"When Mr. And Mrs. Puryear told me their heartbreaking story about Britny, I knew the legislature needed to act to ensure that stiffer penalties are served to domestic-violence offenders that commit murder," said Sen. Chad Barefoot (R-Wake, Franklin). "Britny's Law gives justice to domestic violence homicide victims and their families.

Under the proposed law, a history of domestic abuse would be enough to serve as premeditation to fuel a first-degree murder charge. In Britny's case, her parents said they later found eyewitnesses to the abuse and even found out that a case worker had filed a report.

Since her death, her parents have held vigils in her name. They've had a number of domestic-violence victims approach them for guidance after hearing Britny's story. Just last week Stephen Puryear said he received a message from a mother on Facebook who wanted to know what to do about her daughter being in an abusive situation.

"We wanted her to have a legacy," said Shelley Puryear. "Britny would have liked to help people, that's what she did when she was here."

"For me this is the easy part. The hard part is going to bed every night knowing she's not going to be here," Stephen Puryear said.

Sen. Jackson said there is a similar law in Wisconsin. The Puryears hope North Carolina will be next and that other states will follow.

The Puryears are raising Britny's other legacy, her little boy, Jordan. He was just 5 months old when his mother died and is now 3 years old.

"He's wonderful to have around, he's sweet, he's a joy for us," said Shelley Puryear. "Without him I don't know that I would have been able to continue on myself personally. Continue to be strong."

"He knows Mama Britny is in Heaven," Stephen Puryear said.