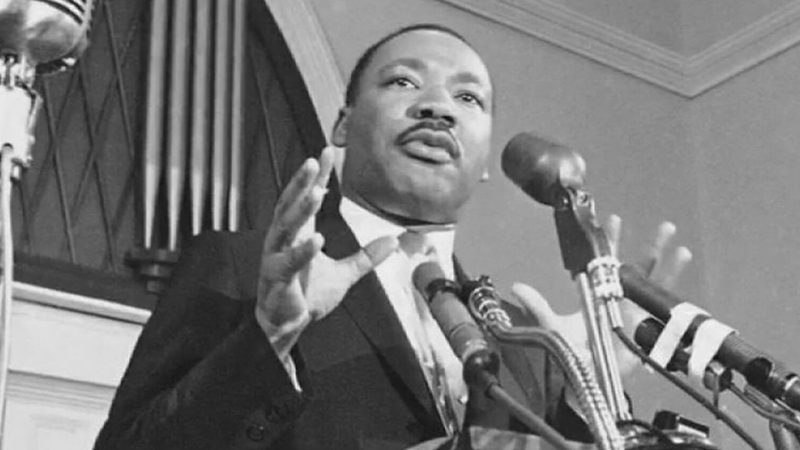 Dr. Kings 'I Have A Dream' speech first given in NC

RALEIGH (WTVD) -- It had been rumored for decades that Dr. Martin Luther King, Jr. first gave his "I Have A Dream" speech in North Carolina months before the iconic delivery during a march on Washington D.C. 52 years ago.

On Tuesday, it was made official with a never before heard electronically-restored recording of the original speech that was unveiled at North Carolina State University's Centennial Campus.

Dr. King first delivered his famous "I Have a Dream" speech at a high school gymnasium in Rocky Mount on Nov. 27, 1962 - nine months prior to his historic August 28, 1963 speech.
The words were slightly different, but the meaning was the same:

For years, historians knew that the civil rights leader first gave the speech in North Carolina, but no one had ever actually heard documented evidence of the Rocky Mount version, or known that legendary poet Langston Hughes actually inspired it, until the recording found in a Rocky Mount library was revealed.

NC State Professor of English W. Jason Miller, author of the new book "Origins of the Dream: Hughes' Poetry and King's Rhetoric", and co-producer of a documentary called "Origin of the Dream" about the intellectual relationship between Dr. King and Hughes, explained that after extensive research the tape recording was discovered in an unmarked box and restored.

"It's a 1.5mm acetate reel-to-reel tape that was sitting there not being played and nobody knew the contents of it," he said.

Herbert Tillman, who was a senior at the Rocky Mount high school where the speech was given, shared what it was like to hear Dr. King speak.

Herbert Tillman, who was a senior at the Rocky Mount high school where the speech was given, was present during the address and shared what it was like to have Dr. King visit the town during that era.
"I was all into it, all eyes, all ears, and I just felt so uplifted," he recalled.

"After listening to it and seeing it on the news, and I come back and say, 'Hey, you know, that was kind of similar,'" he said.