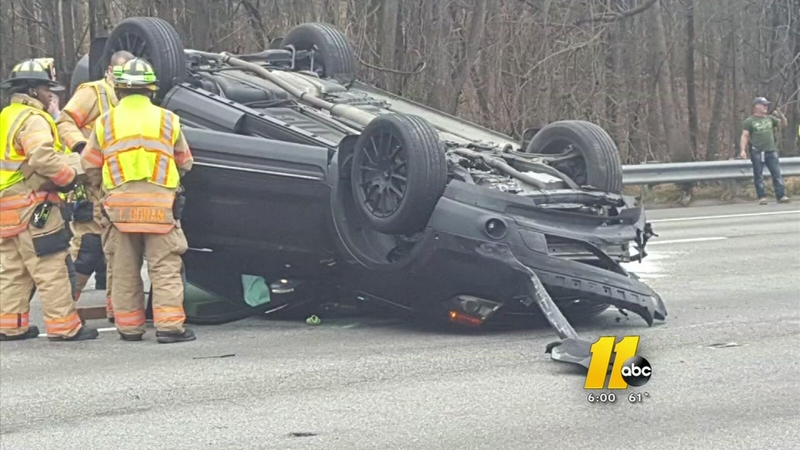 WAKE COUNTY, North Carolina (WTVD) -- The victim of a serious hit-and-run is thanking a Clayton man who brought to justice the driver who fled after last week's crash on I-40 in Wake County.

Shayne Dye was headed east on I-40 in Wake County near the Wade Avenue split when he saw an erratic driver coming up behind him.

He took video with his cell phone as that driver passed others on the shoulder. The driver then hit an SUV, sending the SUV off the road.

"She hit that guardrail hard and I saw her car spin around and flip upside down, and I just thought the worst," Dye told ABC11.

Dye stopped to help the woman whose SUV flipped, and other good Samaritans told him the driver that caused the crash had run into the woods.

Good Samaritans, law enforcement help the crash victim on I-40

Dye, who had a pistol and holster strapped to his side, jumped the guardrail and headed down a steep embankment into the woods after the fleeing man.

He soon caught up with the suspect.

"I had to run down that hill without killing myself," Dye recalled. "Then I tried to stop him at the fenceline down at the bottom of that hill and ordered him to stop. I drew down on him at that point."

The suspect was later identified as Ruben Flores-Garcia of Columbus, Georgia. Dye holstered his gun when he got Flores-Garcia back to the interstate, knowing there might be confusion among law enforcement on the scene.

"Once I reached the top of the hill they didn't know who was who, they just had reports of a guy who had a gun out there," Dye explained.

He added, "I went ahead and threw my hands up, asked them if they needed my handgun. They said no that I was fine."

Thursday, Dye got a call from the hit-and-run victim, Monique Hroncich of Wilmington.

"I'm just blessed that a perfect stranger would seek out someone to ensure that justice is served and he wouldn't get away with such criminal behavior," said Hroncich, who is a wife and a mother.

"I'm just happy that perfect strangers helped me and that I'm alive. God's got a crush on me," said Hroncich. "He wasn't ready to take me yet."

Hroncich suffered two broken ribs in the crash. She says her only disappointment is that she doesn't know how to contact the other good Samaritans.