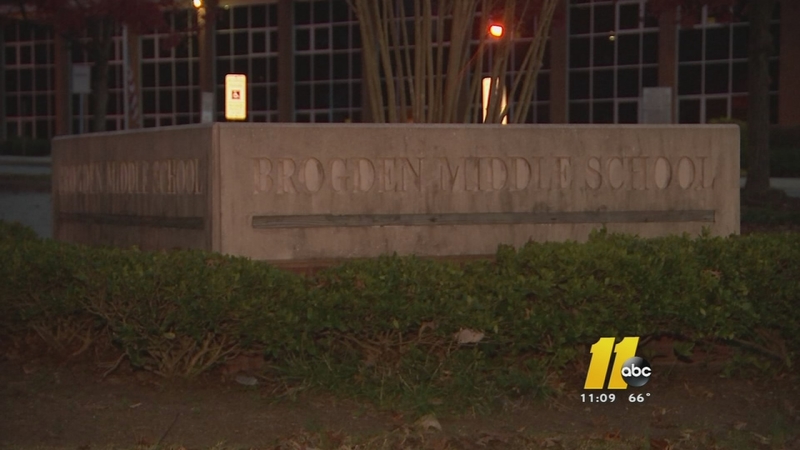 DURHAM (WTVD) -- A Durham mom is preparing to meet with her child's principal after her daughter accused a teacher of making an inappropriate comment.

"After she told me I was still in shock," said Tara Russ.

Russ said her 6th grade daughter came home from Brogden Middle School Tuesday and told her something she said she found troubling. Russ said her daughter was in typing class when her friend got a paper cut. When they asked the teacher for a Band-Aid, he told them where to find it.

"He said in the cabinet with the mirror on it, when you go over there, you're going to see a little black monkey and that's the cabinet," said Russ.

Thinking she was looking for maybe a sticker or something similar, Russ said her daughter asked again only to realize he was allegedly referring to the children's reflections in the mirror.

"They're trying to play it off, which the principal brought up, is that both kids did think he was joking although they felt offended, and that does not fly with me at all," said Russ, "I really think he thought that they wouldn't get it, or it wouldn't get back home."

Russ said when principal returned her calls Wednesday she was told all parties would be interviewed. But then she said her daughter came home with more troubling news. According to her daughter, after talking to the principal, she was sent back to typing class. We're told she usually sits up front in typing but told her mom she was told to sit in the back.

"Since we're in computer class I got on the computer but he had me filling out a form that was asking me several questions," said Russ, repeating what her daughter told her, "One of the questions was like should you have told your mother what happened? What you told the principal, do you think that was true?"

Russ said she has no idea what the teacher did with this supposed form but said she has a meeting with the principal Thursday at 7:30 a.m.

ABC11 reached out to the principal and the teacher and so far have not heard back.

Representatives with Durham Public Schools, however, confirm Russ' meeting with the principal and say the principal has required the teacher to apologize.

"This kind of comment, if true, is highly offensive and simply will not be tolerated. This is absolutely inappropriate and will be dealt with swiftly. Durham Public Schools takes pride in being a place where our students are treated with respect and dignity. That begins and ends with our teachers, who must be held to the highest standards. We are extremely disappointed to hear this."

A spokesperson for Durham Public Schools told ABC11 on Thursday that the teacher had been suspended with pay, and an investigation is ongoing.