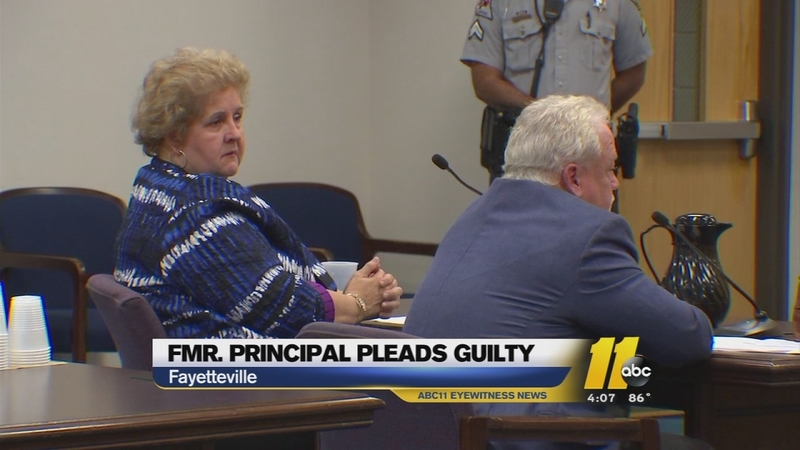 FAYETTEVILLE (WTVD) -- Joan Dayton and her supporters said she was doing the Christian thing when she allowed a sex offender to work on the campus of a private school she founded.

"I believed he was redeemed, and I believe that to this day," Dayton told the court Tuesday. "And I let him back on campus."

Dayton, 64, pleaded guilty to a felony charge of allowing Paul Connor, a registered sex offender to work at Freedom Christian Academy, and not reporting it to authorities.

"Ma'am, you know as well as anybody else how precious our children are," Superior Court Judge Jim Ammons told Dayton prior to sentencing. "The law is the way it is for a reason. We don't allow sex offenders on school campus at all. Ever. Whether you believe they are redeemed or not."

Defense on Dayton: "She's the principal of a Christian school trying to do a Christian thing, and let someone's past be in the past."

In a plea agreement, the former head of school was sentenced to 11 months of supervised probation, 50 hours of community service, and fines. Should Dayton perform and pay the latter before the end of that 11 month period, she may be eligible for unsupervised probation.

Additionally, Dayton, who was arrested and charged on Monday, may not have contact with the school she founded in 2008 until the end of the probation period.

Although another school administrator admitted being aware of Connors' sex offender status, no one besides Dayton and Connor were charged in this case. The plea agreement is arranged in such a way that Freedom Christian Academy as a separate entity will not face charges in the case.

Combined with the voluntary leave of absence Dayton submitted to Freedom Christian in July, it is possible for the school's board to re-hire her before the start of the next school year.

Of note: The terms of Dayton's probation, voluntary leave of absence open the door for Freedom Christian Academy to re-hire her next year

In a statement, the school indicated it was putting the incident behind them.

Freedom Christian Academy is pleased that the Sheriff and District Attorney offices have dropped any further investigation of our school based on Joan Dayton accepting full responsibility for the events that led to the investigation started in May of this year," said Kirsten Brunson, Chairperson of the Freedom Christian Academy School Board. "We feel that this situation is now in the past and we can move forward focused on the education and spiritual growth of our children. We have had an incredible start to our school year and our board and administration remain steadfast in our commitment to the safety and education of our children.

Dayton, who said loved Connors family and wanted to help them, was grateful for the plea agreement.

Last Spring a former Freedom Christian Academy parent reported Paul Connor was working on the campus during the 2011-2012 school year.

Connor was the husband of a FCA teacher.

He was also a convicted sex offender, having registered in the mid- 2000s for a 1994 case in which he was charged with First Degree sexual offense with a minor, sexual activities by a substitute parent, and indecent liberties with a child.

For that, Connor received concurrent 24-38 month and 16-20 month sentences. In March of 2009, prosecutors say Connor read, dated and signed an agreement registering him as a sex offender. He was never to be within 1,000 feet of a school or licensed daycare.

In 2010, prosecutors say Dayton hired Connor's wife who in turn told her about her husband's sex offender status.

Still, in 2011, Dayton asked Paul Connor to help move the school from its original location on Gillespie Street to its current location on Owen Drive.

He was paid for the work, according to prosecutors.

Prosecutors said later that year, Dayton asked Connor to come take a look at a plumbing issue. Both Connor and Dayton later admitted to investigators that Connor informed Dayton he couldn't be at the school because was a registered sex offender. Instead, Connor said he referred the job to another plumbing company.

In May, he told investigators he couldn't remember whether he'd been paid for the consultation.

In another 2011 incident, Connor was contracted by Dayton to build shelving for the school store. He was paid $1700 for the work.

Prosecutors said witnesses told them students had been present on the campus during each work incident. Cumberland County District Attorney Billy West also said Dayton admitted to being aware of Connor's attempt to be pulled off the sex offender registry. A Robeson County judge denied the request.

In addition to the hiring and knowledge of Connor's sex offender status, West said e-mail evidence, text messages and statements showed Dayton was aware Connor "was trying to get off," and "yes-it's a long story," but Connor had been "falsely accused."

Dayton also instructed a Freedom Christian Academy teacher to scrap a planned lesson on locating and identifying sex offenders online, e-mailing staff about an agreement not to go forward with the plan as to not bring attention to Connor's employment.

"I think what we have here is a lapse in judgement, and unfortunately it was criminal," said West.

"She was coming from a good place, not a bad place," Dayton's attorney Michael Boose said. "This wasn't something to expose children to danger. This wasn't to try to make money. This was to try to show that when you pay your debt to society, there is an open door for you somewhere and she was trying to be that open door."

But in the eyes of the law, Connor had not paid his debt to society. He'd violated an agreement he was still being held to as a registered sex offender.

Shortly after the May investigation launched, Connor was charged with violating the sex offender registry act, as well as one count of conspiracy with Dayton. He still faces prosecution in the case.

Dayton was not charged until Monday, and faced the court on Tuesday.

While there was no visible opposition to Dayton in court on Tuesday, supporters packed the courthouse.

That included Kristin Salyer, a Freedom Christian Academy junior who'd been under Dayton's lead since her Pre-School years.

Standing next to her crying mother, the teenager defended Dayton.

"She's gonna get through this because I know the truth and I know who she is," said Salyer. "She's a beautiful person. She's changed my life for the better and she's changed hundreds of other people's for the better."

Dayton and her husband, John, said they would speak about the case in further detail at another time, but Dayton told the judge she wanted to take responsibility for her mistake and a misunderstanding of the law.

"That was my error in judgement, and I'm paying for it," said Dayton.