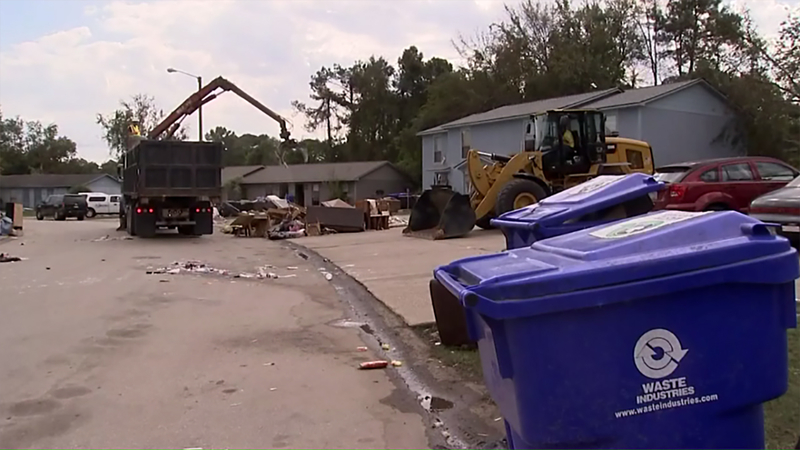 Cleanup after the storm is bogged down in Fayetteville

The debris cleanup crew has already collected tens of thousands of cubic yards of debris. The problem is, some areas, such as one on Blue Street haven't been touched at all -- and city leaders are upset about that.

"We want to get some normalcy back for our citizens," said city councilman Kirk Deviere. "If that takes us working extra, looking at different contractors, looking at additional assistance that's what we need to do."

But the private company contracted to haul away the tons of debris says Hurricane Matthew was no ordinary storm.

"When we were called in initially on the 12th of October, you still had homes that were flooded, and you couldn't even into to make an assessment," said Barrett Homis of Crowder Gulf Debris Cleanup, which is headquartered in Theodore, Ala.

Within days of the storm, mountains of debris were piled by the streets. Though many streets look nearly normal, now, more than a month later, yard waste and storm debris still sit on several city streets.

During a meeting Monday night, city leaders said they were not happy and feel like the debris cleanup hasn't met their expectations.

"This is a once in a lifetime, 500-year flood, said city councilman Jim Arp. "I think we ought to take a 500-year flood approach from staffing, and make sure we are available seven days a week."

Councilman Chalmers McDougald asked if temporary staffing had been considered, and whether there can be two shifts.

The contractor admitted there may be spots where debris hasn't been removed, but promised they were redoubling their effort, adding more crews and trucks to the cleanup effort.

"I think we're on schedule," Homis said "I think we are right where we need to be."

For now, city leaders say they are willing to give contractors a chance to prove that.