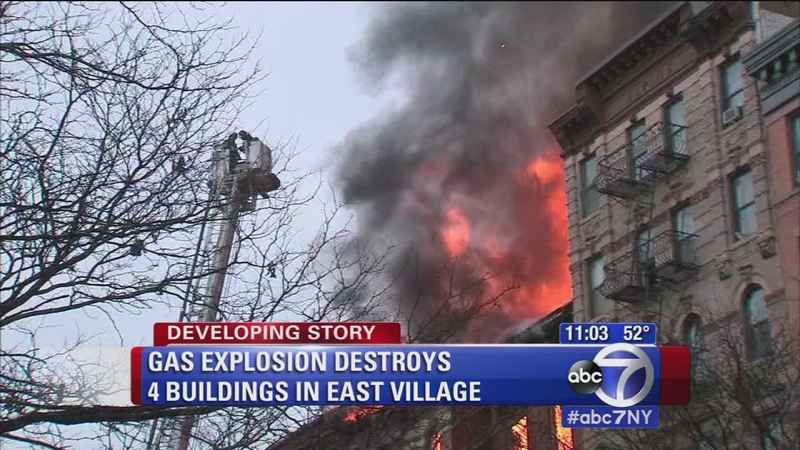 NEW YORK, N.Y. -- At least 12 people were hurt, three critically, in an explosion and collapse at an apartment building in Manhattan Thursday, and a seven-alarm fire raged in the aftermath.

The blast happened on Second Avenue at the corner of East 7th Street in the East Village around 3:15 p.m.

The FDNY arrived on the scene to find the first and second levels of 121 2nd Avenue blown out and smoke pluming throughout the five-story building. Then flames began shooting through the roof and quickly spread to a neighboring building, 123 2nd Avenue, which houses the Pommes Frites. Within 10 minutes, both buildings were fully involved.

It is believed the explosion happened inside a Korean restaurant on the first floor, called Sushi Park, and Mayor Bill de Blasio said the preliminary investigation points to gas and plumbing work inside. Con Ed was at the building earlier in the afternoon, around 2 p.m., for something unrelated. De Blasio said the building did not pass preliminary inspection, and work could not proceed. But there were no gas leaks detected at that time.

"Some glass had blown all the way across the street, people injured," said a visibly shaken James Cole, who lives a few buildings down and fled in just a pair of shorts, sneakers and a sport coat after returning from the gym just prior to the explosion. "There were some Good Samaritans who were helping them, and there was a woman trapped on her fire escape, so they helped her get down. One guy, after helping her, ran back up, and it was already starting to smoke, and he was checking each apartment."

Firefighters were pouring water onto the flames, but they had to pull back due to the intensity. The front of the structure came down shortly afterwards, fire officials cautioned that the neighboring building was likely to fall as well. The top floor was so brittle that water from the fire hose was chipping off chunks of brick and concrete, and it is believed firefighters were using their high-pressure streams to chip away at the remnants of the building.

The buildings at 119 and 125 Second Avenue were also damaged, but firefighters were able to contain the spread to those four buildings.

All buildings in the area were evacuated, and charred rubble littered the sidewalk. FDNY Commissioner Daniel Nigro said that for the first 15 minutes before the building started to collapse, firefighters made extremely dangerous searches of the buildings to locate any victims before eventually pulling out.

"I was going to have sushi at that place, and then I decided to get Ramen, so it's only like three doors down," a witness named Alexandria said. "And then all the sudden, the whole building shook, and it looked like the glass was like rubber as it shook, and it pushed me forward. And I ran out, and I saw people climbing out of the building. I saw one woman bleeding profusely, and she was out of it and didn't know where she was going."

Fire officials said that at least a dozen people were injured, though it was unclear if anyone may have been trapped in the building. De Blasio said there were no reports of unaccounted for individuals, but cadaver dogs were on hand to search the building and rubble once the fire is out and the site deemed stable.

"I just heard a boom, and I came out and saw the fire escape had come off the building and the whole bottom of the building came out onto the sidewalk," a witness said. "Everyone was taking off, and it just, boom, and it was smoke, and then it was on fire, instantly on fire...People were panicking, like no one knew what was going on, and it was very shocking. You could feel the ground move."

There were several mayday calls, but no firefighters were immediately reported injured.

Officials from the Department of Health were checking on the environmental impact, and the Red Cross has set up a reception station at PS 63, located at 121 East 3rd Street.

Health officials advised people to avoid smoke exposure from the fire by closing their windows while indoors and reducing outdoor activity where smoke is present.

All crosstown streets from First Avenue to Third Avenue are closed from East 14th Street to East Houston. Subways are operating normally.