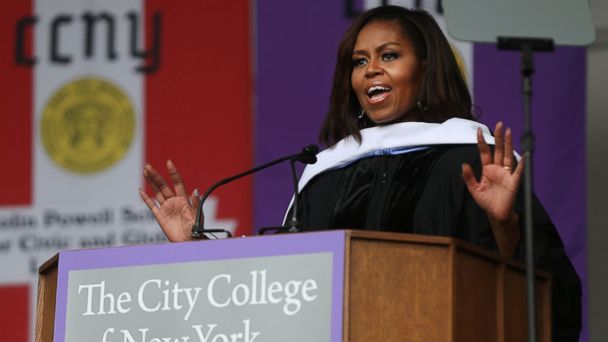 In her final commencement speech as first lady, Michelle Obama struck an uncharacteristically political tone as she told City College of New York graduates to be wary of politicians who have used their platform to spread fear to their followers.

"They seem to view our diversity as a threat to be contained rather than as a resource to be tapped," Obama said. "They tell us to be afraid of those who are different, to be suspicious of those with whom we disagree."

The first lady's remarks even included a rousing and direct rebuke to GOP presumptive nominee Donald Trump's proposal to build a wall along the U.S.-Mexico border, with Obama asserting, "that is not what this country stands for."

"Here in America we don't give in to our fears, we don't build up walls to keep people out because we know that our greatness has always depended on contributions from people who were born elsewhere but sought out this country and made it their home," Obama said.

While she didn't mention Trump by name, her comments were directed at those who "act as if name-calling is an acceptable substitute for thoughtful debate, as if anger and intolerance should be our default state rather than the optimism and openness that have always have been the engine of our progress."

Obama also channeled her travels as first lady to warn students of what happens to governments that succumb to dictators.

"I have seen how leaders who rule by intimidation, leaders who demonize and dehumanize entire groups of people often do so because they have nothing else to offer," Obama said. "Graduates, that is not who we are."

Following the conclusion of her address, graduates could be heard loudly chanting "four more years," though the first lady has repeatedly ruled out interest in seeking public office after she and her husband leave the White House next January.