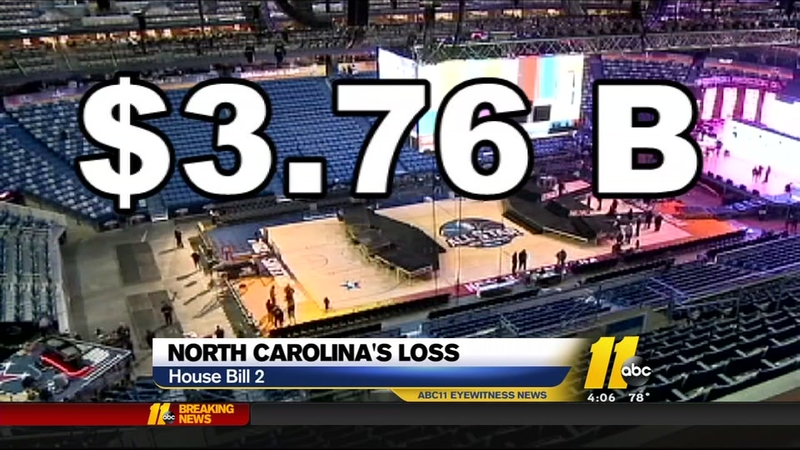 What's the true cost of HB2 for NC

RALEIGH, North Carolina (WTVD) -- Lt. Gov. Dan Forest, one of the strongest supporters of the controversial law known as HB2, pushed back Monday on an Associated Press report that says it will cost North Carolina $3.76 billion.

"The recent economic forecast reported by the Associated Press has no basis in fact and is another attempt to mislead and confuse the public through a bogus headline. The AP's figures are based off one person's guess over a 12 year period," he said.

Earlier this month, Forest was in Texas touring how strong our economy is right now.

He estimated during the next 12 years, the same amount of time the AP looked at, North Carolina's economy is projected to soar by more than $6 trillion.

The AP reported North Carolina has suffered financial hits ranging from scuttled plans for a PayPal facility that would have added an estimated $2.66 billion to the state's economy to a canceled Ringo Starr concert that deprived a town's amphitheater of about $33,000 in revenue.

CLICK HERE FOR HOW THE AP TALLIED THE NUMBERS

"We now know that, based on conservative estimates, North Carolina's economy stands to lose nearly $4 billion because of House Bill 2. That means fewer jobs and less money in the pockets of middle class families. We need to fix this now. I remain ready to support a compromise that works to end discrimination and brings jobs and sports back to North Carolina,"said Governor Roy Cooper.

Last Thursday marks a year since HB2 was passed during a special session.

Concerts and sports events were cancelled in protest. Some businesses pulled out of the state.

"There's millions and millions of dollars of future opportunity that we're losing as well . This $3.76 is really just the tip of the iceberg and there's so much more under the water," said Equality NC spokesperson Ben Graumann.

The AP estimates are being released as the NCAA is set to award bids for championship games. North Carolina could lose 5 years worth of events if HB2 isn't repealed.

Virginia Governor Terry McAuliffe is looking to capitalize and poaching the NCAA. he sent out a tweet Monday saying, "Come to Virginia-open and welcoming."

Several repeal bills have been drafted. None have won support between Republicans and Democrats.

Also in the report, the Associated Press called the $3.76 billion estimate "likely an underestimation of the law's true costs."