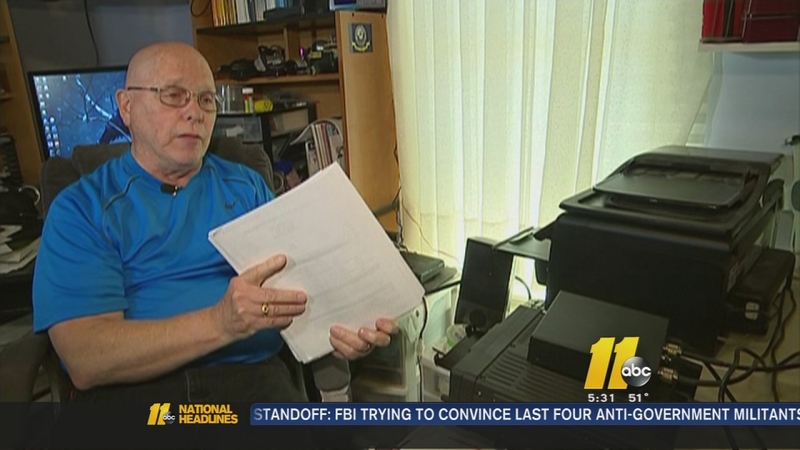 FUQUAY-VARINA (WTVD) -- Imagine your home fax machine sounding off (if you still have one) but when you check it, you find a stranger's detailed medical information.

That's exactly what Fuquay-Varina's John Lockhart says he's been dealing with for the past six months. "You usually get one a day, sometimes you'll get four a day," Lockhart said ruefully.

He's lived in his home for about 20 years and says he's had the same home phone and fax number the whole time. "Everything was fine until probably about six months ago and the doctor got a number that is just one number different from ours."

Dr. Kingsley Ugochuckwa, also in Fuquay, has a fax number that starts with a 577. Lockhart's starts with 557.

"I get refill requests, I get diagnoses on patients. I've got social security numbers, I've got medications people are on. I've gone to drug stores to talk about this myself and the faxes just keep on coming. Wake Med Hospital; I get faxes from them. All trying to talk to Dr. Kingsley in Fuquay."

Lockhart says the faxes come in at all times of day. "We were kept awake from two to four o'clock (in the morning) and you pick up the phone and it's a fax machine screeching trying to talk to another fax machine. I've gone to CenturyLink and tried to see if there a way I can block numbers and they say no."

"It's almost made our phone number unusable," Lockhart complained, "because of incoming calls you pick up - you don't know if the fax is going to be screeching at you or someone telling you your kids are sick or something."

The only thing Lockhart could do would be to change his number, but he says he shouldn't have to do that.

He says he's talked to Ugochuckwa about the problem but nothing has been done about it.

"You'll call them, you'll talk to them, they say they'll take care of it, then maybe you don't see it anymore from that office for a month. But then they start coming again. I would think every one of those could be a fine from the U.S. government."

It's unclear how many of the medical providers Lockhart says have sent information to his fax knew about the problem, but he says he personally talked to a number of pharmacies and providers and most of them have continued making the same mistake and lighting up his fax machine instead of Dr. Ugochuckwa's.