Stogner passed away at his home Sunday night after battling with ALS. He was 69 years old.

ABC11 sat down with Gov. Pat McCrory to get his thoughts on the North Carolina legend.

"I got to know him a brief time outside the studio - it's a time I'll cherish," McCrory said. "The disease must have been so tough on him because he loved to communicate."

The governor said he called Stogner's family Monday and spoke to his son.

McCrory said that we'll miss his "genuine care and wisdom."

"Larry Stogner was a pioneer in journalism and beloved by generations of North Carolinians," said Governor McCrory. "Ann and I join with our entire state in remembering his military service, time as a broadcaster and courageous battle with ALS. His fight will help save lives and I am honored to have had the privilege to know Larry on a personal level and see firsthand the passion he had for his family and others. As we pray for his wife Bobbi and the entire Stogner family, we thank Larry for the company during his 40 years of reporting the news and making our state a better place."

Ann & I join with our entire state in remembering Larry Stogner. We pray for his wife Bobbi and the entire Stogner family. pic.twitter.com/wTynV8VrVy

The governor awarded Larry Stogner the Order of the Long Leaf Pine in February 2015 during his last broadcast and hosted Stogner and his wife at the Executive Mansion several times. Larry Stogner receives the Order of the Long Leaf Pine

Leave your condolences for the Stogner family 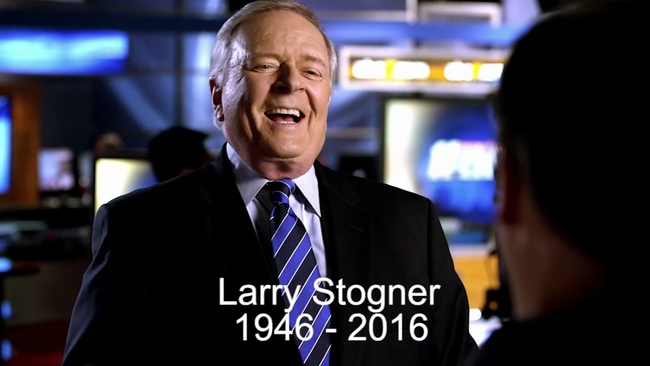