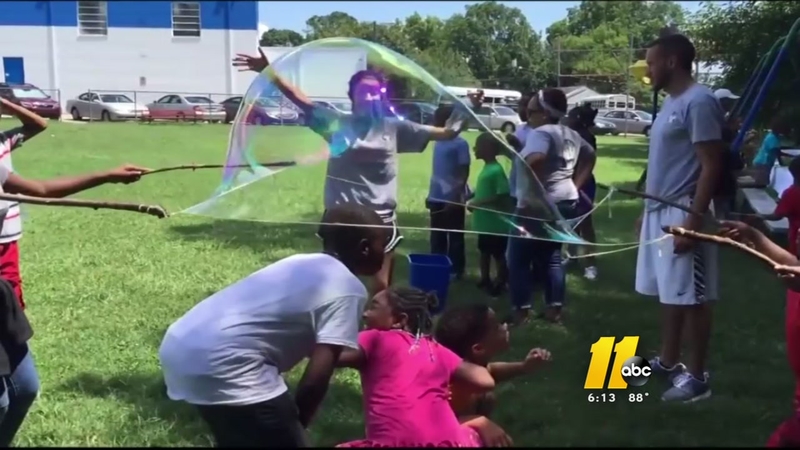 DURHAM (WTVD) -- Nearly 50 children and teens from east Durham will have an opportunity to enjoy the Boys and Girls Club of Greater Durham for free this summer thanks to a $25,000 grant.

During Mayor Bill Bell's final State of the City address in March, Blue Cross and Blue Shield (BCBS) awarded the Boys and Girls Club the scholarship in honor of Bell's retirement. Bell and BCBSNC are long-time supporters of the program.

The Boys and Girls Club decided to direct the funds to help 50 children who would not be able to attend the camp which starts Monday.

The sessions start at $240 and that doesn't include several fees including the application fee.

During the program, students will take field trips, exercise, play games, and work on their social, math, and reading skills.

A'Mya Martin is one of the students receiving free assistance.

The 7-year-old said she's looking forward to participating in the program.

"It's fun and we get to learn about everything," she said.

Change Bolden, who works at Boys and Girls Club, said she's seen a difference in the children's personalities after participation. And during the program, she said they feel safe and supported.

"Some parents may not be able to help the with homework, help them read, and sometimes this is their only meal," Bolden explained. "They feel free and they feel loved."

Director of Operations, Benay Hicks, said that's the club's mission. It's also why Hicks and her team chose to use the grant to target children and teens from east Durham.

East Durham is a section of the city police are familiar with. This week, detectives responded to a report of a 14-year-old who was injured from a gunshot wound off Killarney Road.

"14-years-old is where we start to get nervous with these kids," Hicks said. "They are outside, they are hanging out, they are not always being watched by their parents or their guardians, so we want to get them here to the Boys and Girls Club, so maybe we can avoid some of these situations."

The Boys of Girls Club of Greater Durham, located on East Pettigrew Street, originally started as a concept in 1939 to combat juvenile delinquency.

The following year, it was named the John Avery Boys Club, Inc., and in 1986, the club expanded to include girls.

In 2015, the name officially changed to the Boys and Girls Club of Greater Durham, an in 2017, the club merged with Boys in Girls Club in Orange County.
Report a correction or typo
Related topics:
durhameducationsummerchildrenteen
Copyright © 2021 WTVD-TV. All Rights Reserved.
TOP STORIES
Return of Brewgaloo draws big crowd to downtown Raleigh
Family holds memorial for teen lynched in Chatham County 100 years ago
Search for Brian Laundrie in nature reserve called off for night
'Relieved:' Faith Hedgepeth's family releases statement after arrest
Howell's 5 TDs, ground game help UNC steamroll Virginia 59-39
NC Central wins; 2 shot nearby as stadium placed on lockdown
Show More
NC State bounces back from first loss to pound Furman, 45-7
Duke rides fast start to 30-23 win over Northwestern
Police: Gabby Petito case not linked to slaying of two women in Utah
US ramps up plan to expel Haitian migrants gathered in Texas
What are your chances of being exposed to COVID-19 at an event?
More TOP STORIES News