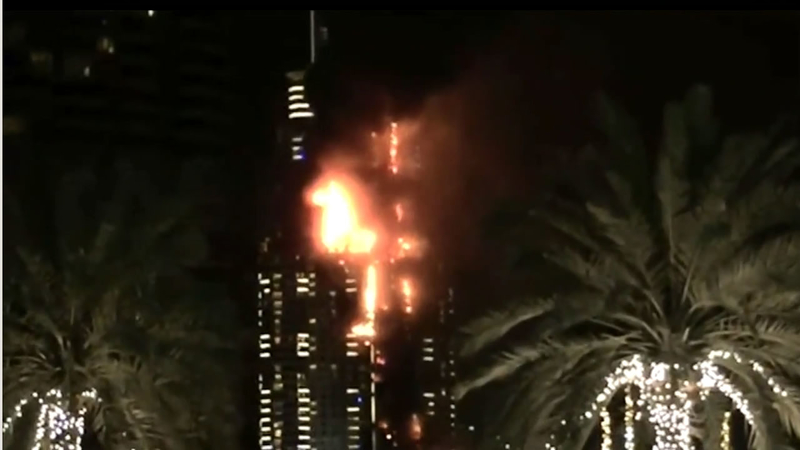 DUBAI, United Arab Emirates -- Fire engulfed a luxury building near the world's tallest skyscraper in Dubai on Thursday, where tens of thousands of people had gathered for a massive New Year's fireworks display.

It was not immediately clear what caused the fire, which ran up at least 20 stories of the building, which would likely have been packed with people because of its clear view of the 828-meter (905-yard) tall Burj Khalifa. The hotel towers over the Souq Al Bahar, a popular shopping area with walkways that connect the Burj Khalifa and the Dubai Mall

Burning debris rained down from the building as firetrucks raced to the scene. It was not immediately clear if anyone was injured in the blaze. A civil defense official told The Associated Press by phone that the building was evacuated and no injuries were reported. The official was not authorized to brief reporters so requested anonymity.

The fire broke out at The Address Downtown, a 63-story luxury hotel and residential building, about two hours before midnight, when the fireworks display was set to begin. To manage the crowds, Dubai police had closed off some roads and the metro before the fire broke out.

Dubai's Media Office wrote on its official Twitter account that four teams of firefighters were working to put out the blaze. They said the fire appears to have originated on a 20th floor terrace.

The emirate said New Year's Eve celebrations will go on as planned. Organizers had expected a million people to attend.

Dubai planned to wow spectators with three separate firework displays. The show was to begin at the Burj Khalifa, which organizers said was fitted with 400,000 LED lights. They said 1.6 tons of fireworks would be used in the display.

From there, the fireworks were to light up the sky around the sail-shaped Burj Al Arab and over a man-made palm-shaped island. Fireworks also will be on display in Abu Dhabi, the capital of the country of seven emirates.

Nearly an hour after the fire began, some onlookers began to leave while others stood, pressed against crowd barricades, watching the blaze. Among them was Chris Browne, a tourist from London, who watched the blaze with her husband, Stephen, standing behind her. They said they hoped no one was injured.

"It's pretty scary stuff," she said.

Standing nearby, Stuart O'Donnell, a British intensive care nurse who works in Dubai, said he was worried for those inside the building as it was in a prime location to watch the fireworks display.

"You feel sad for the people inside... It spread so quickly when it started," he said.