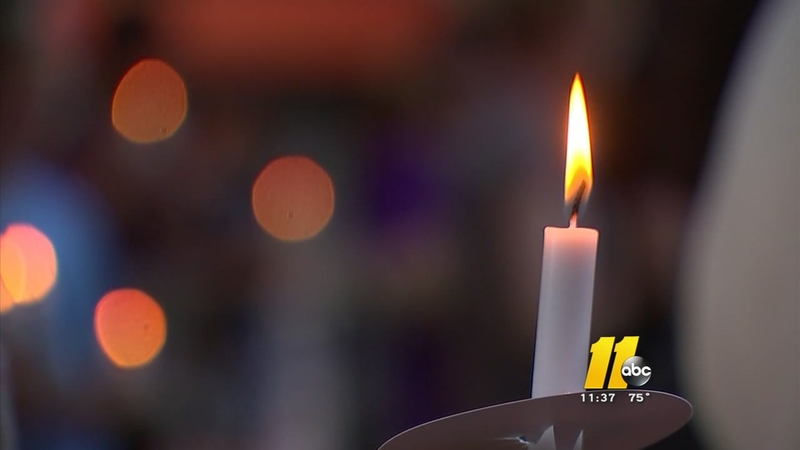 DURHAM (WTVD) -- People across the country have been marching and praying for an end to the violence after last week's deadly police shootings and murder of five police officers in Dallas. Sunday, the prayers reached the Bull City.

It was another example of a community coming together to heal at Sunday's candlelight vigil on Durham's Market Street. Miles away from the deadly police shootings of Philando Castile and Alton Sterling, hundreds of neighbors gathered downtown to sing their song of hope.

High school students Zoe Thompson and Tabitha Radaker organized Sunday's vigil based on their concerns of how some police treat black men.

"It hurts to know that other people who look like you, who are just like you, are being murdered just for the color of their skin," Thompson lamented.

"Not only does it hurt, but it's scary," Radaker explained. "Before I came here, my brothers came to my house and I was just watching the both of them be goofy, and I think 'How could anybody see them as threatening?'"

Thompson and Radaker's vigil was also a platform for performers to express their frustration and pain.

"I was told that a bullet is a seed in America's garden to watch a black body bloom," one performer shared.

Durham's new police chief Cerelyn "CJ" Davis watched the event unfold; it was her third vigil in one day.

She said her engagement is an effort to be visible, to build relationships, and to let neighbors know she hears their concerns and fears over racial profiling and police brutatlity.

"We plan to have training for our officers on deescalation, we also plan to help young people better understand how they can have safe encounters with officers."

Davis said the tragedy in Dallas weighed very heavily on her team. For her, it was a reminder that it's a different day in law enforcement. Officers have to extend themselves more and be a part of the community they serve.