I-Team: Are our schools more secure since Sandy Hook? 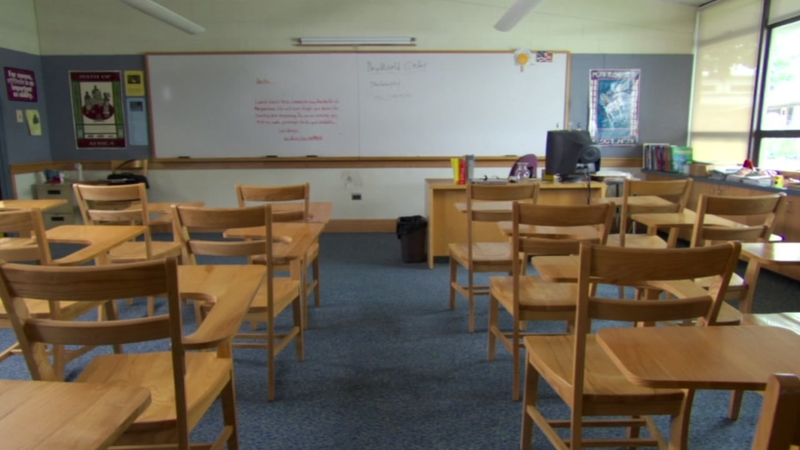 Are our schools safer since Sandy Hook?

WAKE COUNTY, North Carolina (WTVD) -- Four years after the massacre at Sandy Hook, schools in North Carolina are safer than they were but still largely "soft targets," according to security experts.

Twenty children and six adults were gunned down at Sandy Hook Elementary school in Newtown, Connecticut, in December 2012. In the months that followed, state and local leaders promised swift action would be taken to make our schools safer. Experts across the board agreed there were myriad ways to fortify our K-12 schools and task forces were convened to do just that.

Wake School Board Member Keith Sutton called together the Task Force for Creating Safer Schools in Wake County, headed up by Sheriff Donnie Harrison. The group came up with 15 recommendations, 14 of which have been acted on. They included increased safety training, better emergency plans, more drilling, increased security fortifications, and a full-scale risk assessment.

Wake security officials wouldn't sit down with the I-Team for this story, but school security experts say many of the changes will never be seen or felt by parents or students.

"Since Sandy Hook, a tremendous amount of information has been shared and training has been ramped up, to prepare for an event like that and to respond to it," said Kevin Allen, president of Lobbyguard.

Allen's company has installed about 60 digital visitor management systems in Wake schools, allowing schools to track visitors and run instant background checks. But while the addition of products such as Lobbyguard speaks to what's been done to make schools safer, Allen says the lion's share of changes is basically invisible.

"You do get a sense that we're a lot smarter if something happens; a lot has changed," Allen explained. "The communication between law enforcement, the schools, the faculty, and the students is dramatically better. The response time has dramatically been shortened. Since Sandy Hook, since way back way back in 1999 with Columbine, I see it. I see the training, I see the policies that are in place, I see the school resource officers around the district and what they're trained to do. You don't always see that."

But the I-Team spot-checked a dozen elementary schools in Wake County and half had front doors that weren't locked and, in many cases, had no one watching who was walking in.

Every elementary school in Wake County should have a locking front door with a camera and a "buzz-in" entry system; funding for exactly that was approved in a 2013 bond but the work is slow going. Asked by the I-Team if he thought it was acceptable or safe, Keith Sutton said, "I would come back and say, 'Is that the safest? Is that the safest environment?' Probably not."

But Lobbyguard's Kevin Allen pushed back, offering perspective. "As a parent who just walks into a school and thinks, 'I just walked in here and I'm walking around,' well, you shouldn't be allowed to do that. Agreed. But that in and of itself isn't the be all, end all of where school security starts and stops."

Allen described the goal in school security as zone defense, collapsing in on itself as a person gets closer to the building.

"If you're looking at a school and you want to see what good practices are, it starts when you drive into that parking lot, when you get out of that car, how are you managed as you walk into that school, how are you managed as you leave. No matter what you build - a fortress - it's not completely impenetrable. What you're trying to do is make it a hard target so it isn't even attractive for someone to do something wrong."

According to a spokesperson for Wake County schools, a number of things have been done to "harden up" school security, including:

- New minimum levels of training for all staff
- New requirements for all classrooms to have emergency supplies and all schools to have a critical incident response kit
- Random checks of schools and routine compliance checks of schools by security administrators
- Annual security review of every campus by security administrators
- New system-wide, comprehensive, all-hazard Emergency Operation and Security Master Plan developed
- New requirements for all school emergency response team members to complete ICS 100 and ICS 200

In addition, the School System says they've implemented a new bullying resource guide, new access to peer mediation and restorative justice, an SRO summit, and a Parent Academy, including "Keeping Your Child Safe at Schools," "GANG Awareness," and "Bullying Awareness."

A few of the recommendations are still in progress, including the ramping up of counselors, social workers, psychologists, and nurses at all Wake County schools and the standardization of security equipment at schools across the county. And it's what hasn't been finished that most concerns Wake Sheriff Donnie Harrison.

"Technology is so great now," Harrison continued, "we need to be able to monitor these schools. If an alarm goes off or some suspicious person is around these schools, we should be able to monitor them with cameras. But the Garner cameras are different from the Cary cameras, the Cary cameras are different from the Wake Forest cameras."

Harrison's solution is more dramatic: an independent Wake County schools police force. "You need somebody - a chief of police - that knows what's going on in all these schools because they're so different. We need to bring these schools together."

Harrison says nine out of the 14 largest school districts in the country have their own police department and says that would go a long way to alleviating many of the security concerns he and other experts share when it comes to Wake schools.

"It's my job to serve and protect," Harrison said, "and I'm going to continue to do that but I need some help. Somebody needs to step up to the plate if they want to make these schools safer. We need someone that stays on it all the time. I can't concentrate on all the schools."

But experts say you don't have to go THAT far.

"We see a lot of inexpensive ways to make schools safer and we see schools adapt to these," said Allen. "It doesn't require tens of thousands of dollars to make a school a safer place. Sometimes it's small improvements over the years that can make it harder and harder to target."

Curt Lavarello runs the School Safety Advocacy Council and says it doesn't take a lot of money, it takes commitment. "If you're going to buy in and try to really keep kids safe, you've got to do it, it's got to be 365 days a year, not just when there's a major shooting on the forefront of the news."

Lavarello was invited to the White House after three recent mass school shootings and says he advised three different administrations on the same thing. Still, he says, many of the same pitfalls and patterns repeat themselves.

"We're such a resilient country, we bounce back from these tragedies very well and unfortunately, we become vulnerable again. And when we become complacent and vulnerable, that's when we see another attack on a school. And we see a lot of great ideas go by the wayside because school districts over-committed themselves financially or staffing-wise and as long as it's not on the front page of a newspaper or a TV station, it gets pushed to the back burner in many cases."

Lavarello has three clutch recommendations when it comes to school security starting with staff knowing their students really well.

"I get to school districts that are spending millions and millions of dollars on walk-through metal detectors and bulletproof window film and they have no rapport at all with their students."

He also says doors that lock from the inside and visitor management systems like Lobbyguard are critical.

In many ways, products such as Lobbyguard have changed the face of school security. While experts admit that it won't stop every "bad guy," visitor management systems can make a big difference in catching people who shouldn't be at school for many reasons other than wanting to open fire.

"We stop about one or two registered sex offenders every single week somewhere around the country," Allen said of Lobbyguard's system. "We stop many more times that of red flag entries. These are individuals that the school has flagged for questioning or escort purposes. Reasons for a red flag might include a restraining order on someone who works at the building. Something like gang activity in the past. Whatever reasons the school wants to red flag you, we can do that as well.

When it comes to locking doors, security experts are of two minds on many of the products designed to lock kids in.

While Lavarello said his group may recommend door stops or door bolts in some situations, he said they may not be right in every classroom. He noted that while easily locking doors are a critical safety mechanism, there have been cases where the devices backfired. Still, he said, "we're to the point in this country where every classroom door should be able to be locked" from the inside.

He also said drilling is critical. Where many school districts require a fire drill every month, he says there should be more parity with active shooter drills.

Drilling has increased at Wake elementary schools, but not to that level - and that was troubling to Wake Sheriff Donnie Harrison.

"It's just like a fire drill. If you don't do it enough, the kids don't know what to do or where to go. As large as schools are now, they have got to drill. If they're looking for a teacher to lead the way, what happens if that teacher is shot or twists an ankle? Are those kids going to know where to go?"

Harrison said it's not just the kids. He couldn't remember the last time his deputies were part of an active shooter drill in Wake County.

"Look how we're growing," Harrison said. "Down the road, and it may not be in my time, but we're going to have to do something."

One thing every security expert we talked to agrees on is that technology isn't the "end-all, be-all" of school safety. It's people, they said, that make all the difference.

"If someone doesn't check in at the front office and the school staff have good training, then they're being stopped at a very early point in their walk. And that's critical. It's something that no technology can bring to bear. We can put up fences and gates and guardhouses but if you're going to find a way through that, it comes down to people.