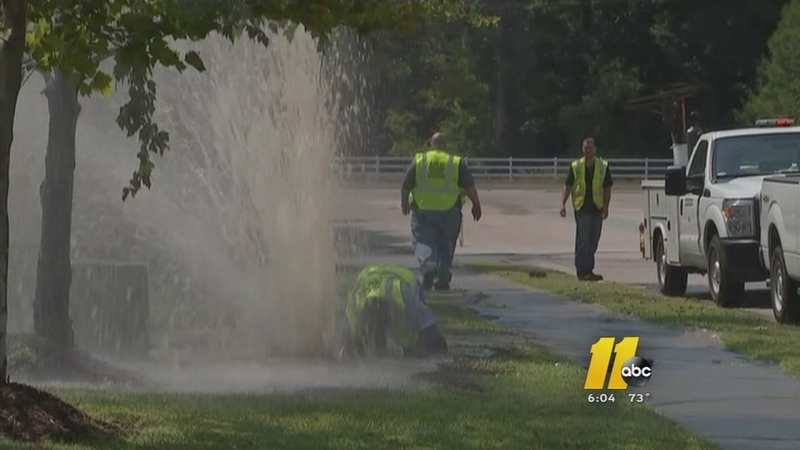 RALEIGH (WTVD) -- The city of Raleigh has a problem.

More than 5,000 miles of water and sewer pipe buried underground that are getting older and will need to be replaced.

Ed Buchan runs the city's water and sewer systems and says they're in process of a major, long-term overhaul of the city's pipes.

Unlike most cities, Raleigh includes a separate line item on water bills specifically to pay for maintenance and replacement lines, but Buchan says that doesn't cover the total cost.

In fact, Buchan says it would cost $7 billion (you read that right) to replace it all, but says they're taking it project by project on an as needed basis; starting with old pipes that carry a lot of water or sewage.

And that means they're focusing most of their attention inside the Beltline. "Right now," Buchan said, "what you're seeing is a lot of replacement in the downtown area because that's World War II age stuff that has to be replaced."

But where most everybody might understand that old pipes eventually need to be changed out with new pipes, not everybody is happy with every project.

"It hasn't hurt me yet, but it's coming," said Bobby Gregory, who owns Bobby's Welding Service.

Gregory's shop sits across from a major dig on Hodges Road, part of the city's "Crabtree Creek Pipeline" project that runs from Capitol Blvd almost to Crabtree mall.

Hodges Road has been closed down since May. And while Gregory can still access his business, he says that's set to change in a few months when crews tear it up and close it down temporarily.

But Ed Buchan says even major headaches will be necessary to avoid migraines down the road.

"We don't want to burden our grandchildren and future generations by having to replace everything all at one time."