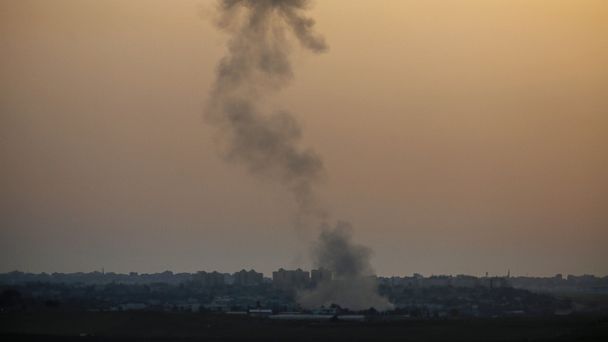 Israeli ground troops entered northern Gaza tonight to take out a number of missile launch sites, according to the Israeli military.

The move comes after weeks of growing tensions and nearly a week of escalating missile strikes from both sides.

The IDF, the Israeli military, said its goal in crossing into northern Gaza was to dismantle some of the sites that Hamas militants have been using to launch rockets into northern Israel.

During the incursion there was an exchange of fire with militants that left four Israeli soldiers lightly wounded, according to the IDF.

The IDF troops returned to Israel after the mission, and no soldiers were left in Gaza, the Israeli military said.

The Israeli naval commando raid in Gaza reported earlier occurred in the Al-Sudaniya beach to the northwest of the Strip, Al Jazeera reported.

What is not clear is whether this brief surge into northern Gaza by the Israeli military is a pre-cursor to a full scale ground invasion, but all along the road toward northern Gaza ABC News correspondents have seen what appear to be the preparations for one. There are tanks and troops amassed by the border.

The Israeli military has been saying for a couple of days that it is ready, and tens of thousands of troops have been mobilized in support of a potential ground invasion.

The IDF had earlier warned residents of the northern Gaza Strip to leave their homes, saying it was for their own safety.

The conflict had already escalated Saturday, with Hamas bombarding Tel Aviv with the most rockets yet, and Israel responding by pummeling the Gaza Strip.

In the five days of bombardment by Israeli missiles, more than 156 Palestinians have been killed, according to officials there.

One of the Israeli strikes hit a center for the disabled where Palestinians said two patients were killed and four people seriously hurt. In a second attack, on Saturday evening, an Israeli warplane flattened the home of Gaza's police chief and damaged a nearby mosque as evening prayers ended, killing at least 18 people, officials said.