Locals sound off over video of South Carolina student 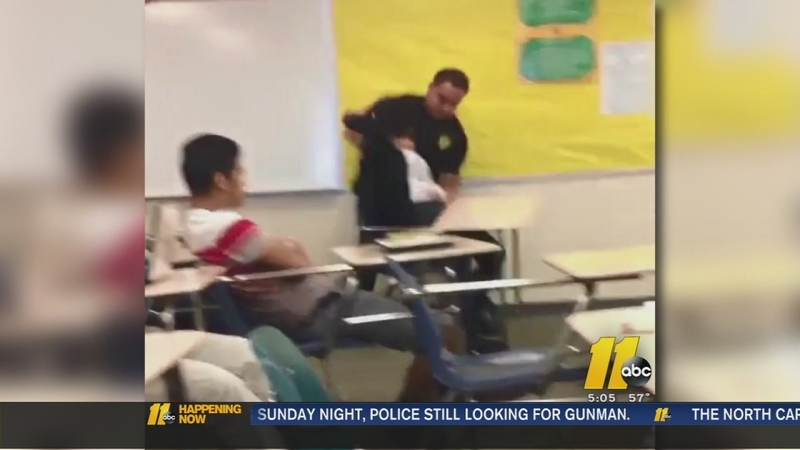 RALEIGH (WTVD) -- The FBI is investigating and the Justice Department says it has opened a federal civil rights investigation after a video surfaced showing a South Carolina school resource officer violently pulling a student from her desk and tossing her across the classroom floor.

Justice Department spokeswoman Dena Iverson said the investigation will look into "the circumstances surrounding the arrest" and determine if a federal law was broken.

Senior Deputy Ben Fields has been placed on leave after the confrontation Monday at Spring Valley High School in Columbia. Officers say the student had refused Fields' order to leave a classroom for being disruptive.

Folks in our area are sounding off. Some people feel the officer's actions were too harsh.

"Certainly does look like excessive force. There's no question about that," said John Constance.

"Whether there are extenuating circumstances, I don't know, but I can't imagine what they would be to justify that kind of force with a student. It was clear that the student was already restrained when she was down on the ground, so that second flip I'm not quite sure what that had to do with the guy's job."

"I think there has to be an agreement among the police force, how strong they are," said Gay Bulterman.

Others people are siding with the SRO. One viewer wrote on the ABC11 Facebook page, "She (the student) was told to do something by authority (cop and teacher) and didn't cooperate. What was the other choice if she is not going calmly and peacefully?"

Rules for SROs differ from district to district. In Wake County, according to the Memorandum of Understanding, the use of force may be implemented "based on the totality of the circumstances and shall not be excessive, arbitrary, or malicious."

SROs are stationed at every middle and high school in Wake County.

Officers from nine different police departments, as well as the sheriff's office, sign this contract when they become an SRO.

The agreement also requires the officers to undergo a 40-hour training course.

Wake County Sheriff Donnie Harrison is speaking out about force in the classroom.

"If there's a violation of the law, deputies will do in schools as they do on the streets," he said.

Jeff Robinson is the Law Enforcement Training Director at Wake Tech and oversees the SRO training program. He spent a couple of years as an SRO himself and said it isn't always easy working with young kids.

Robinson wouldn't comment on the South Carolina case but plans on using this video as a training tool. It will be introduced this summer when SROs head to class for training.

"Anytime there's footage or any information we can utilize to help other SROs, other officers, to do their job to make sure that we can be safe and we go home every night, that's what we want to do," said Robinson.