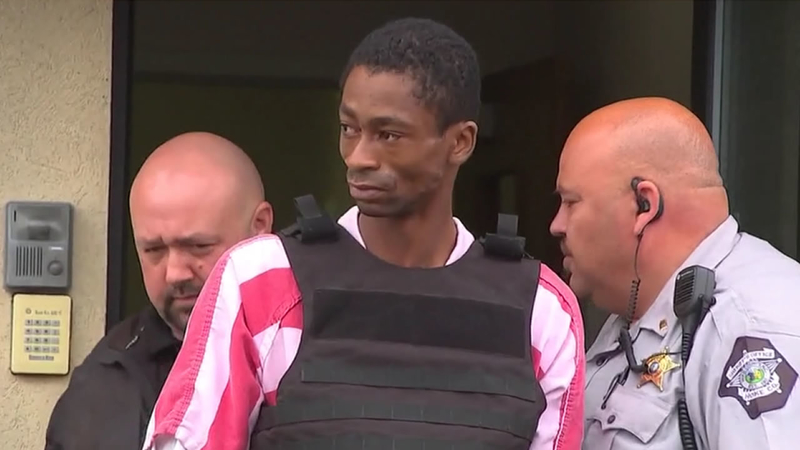 RAEFORD, North Carolina (WTVD) -- A man who allegedly stabbed a 2-year-old and 4-day-old child to death after accusing his wife of having an affair went before a judge in Raeford Monday morning.

Tillman Freeman was escorted into the Hoke County Courthouse under heavy guard. He was wearing a bulletproof vest. Officials said there have been threats against his life.

No cameras were allowed in the hearing where the charges were read.

Hoke County Sheriff Hubert Peterkin said the 30-year-old argued with the children's mother Friday while she was in the hospital recovering from giving birth. He allegedly took Genesis and Serenity Freeman to a wooded area near N.C. Highway 211 and Army Road in the Raeford area and stabbed them multiple times.

"From what our investigation's telling us, they had a dispute, where (Freeman) allegedly made accusations about the babies not being his, a child not being his or maybe her involvement with someone, and when he took the kids we understand he left in a rage," Peterkin told ABC11.

Freeman is charged with two counts of first-degree murder.

"I'm his brother in law. We stayed in the same complex. And this right here, I didn't expect it from him," he explained.

At a vigil for the children Sunday night, the children's mother - Candice Smith Freeman - asked for the support of the community.

"I just know that I miss my babies and I need y'all to pray for me please..." she said.

Smith told ABC11 that she feels betrayed. She said she never thought her husband would be capable of killing their children.

"I feel an emptiness in my heart," she continued. "Like more than half of my heart is gone."

A GoFundMe page has been started to help with funeral costs. Click here for more