Alcohol found in car of teen found dead in woods 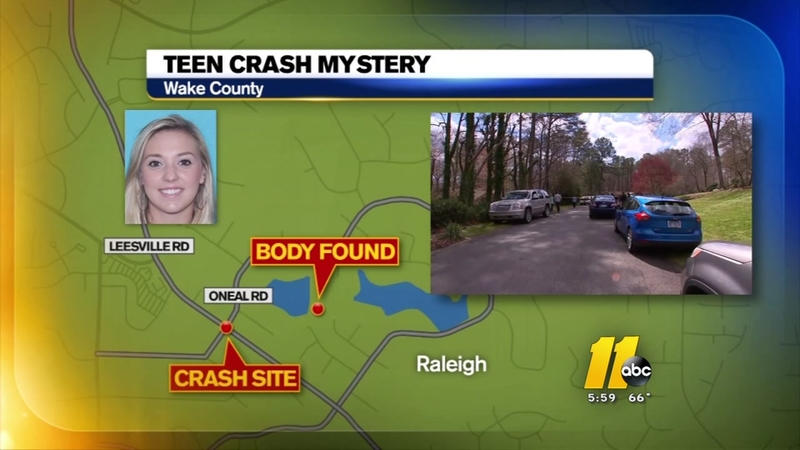 WAKE COUNTY, North Carolina (WTVD) -- An open container of liquor was found in the vehicle of a teen who went missing from a crash scene and was later found dead in the woods, the North Carolina State Highway Patrol said Monday.

The Wake County Sheriff's Office said the body of 17-year-old Lauren Maria Jenkins was found in the woods Sunday.

Deputies say Lauren was involved in an accident late Friday night at the intersection of Leesville Road and Oneal Road, and she walked away from the crash scene.

The Highway Patrol said although the open container of liquor was found in her car, it's not yet known whether drugs and alcohol are factors in the crash. Troopers also said speed was not a factor.

Lauren was last seen leaving the scene on foot Friday and had not been seen or heard from by her family since the accident.

Troopers said Lauren was making a left turn into Springdale Estates and she failed to yield and crashed into another vehicle. Troopers did not comment on the other driver's condition.

There were two other people in the car with Lauren when she crashed. Both were treated for injuries. Neither their conditions nor their identities were released.

There was an active search for her at Springdale Estates on Sunday; the Wake County Sheriff confirmed her body was found in the woods near two ponds.

Authorities and volunteers were out in the area and the NCSHP aviation unit assisted with the search.

Her body was found in the woods in Wake County

Troopers said they don't know whether Lauren died of injuries from the accident. Her body has been sent to the Medical Examiners Office to determine the cause of death.

"We would like to thank all of those who have reached out to help our daughter, to those who shared our daughter's photo on social media, and to all of those who put their lives on hold to help resolves this nightmare. Out of respect for our family, we ask that you give us the privacy and time we need to mourn this enormous loss. We know there are unanswered questions and in time, they will be resolved. In the meantime, please continue to keep Lauren, her family, and her friends in your thoughts and prayers."

Jenkins was a senior at Leesville Road High school.

Grief counselors have been on hand helping students as well as staff.

"A bunch of the teachers were crying and tearing up," said student Emeline Wilson.

Some classmates wore red, Jenkins' favorite color, to school Monday. There was a moment of silence at the beginning of the school day.

"Most of the time kids are on their cell phones all the time," Wilson said. "But everyone just stopped for a minute and just remembered her."