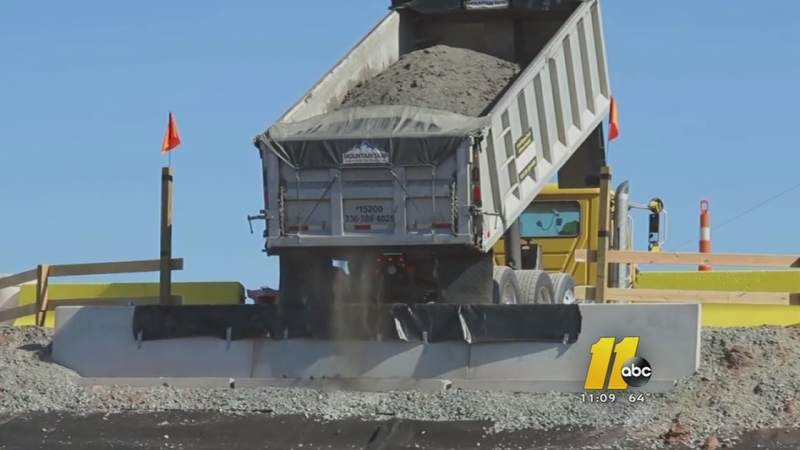 MONCURE, NC (WTVD) -- Duke Energy has started the process of moving tons of coal ash into a former clay mine near Moncure along the Lee/Chatham County line. But a couple living next to the mine says Duke didn't give them the full story.

Ellis Manfield's land has been in his family for over 100 years. His parents built the house and he planned to pass it down to his children. He told ABC11 he's re re-thinking that thanks to the new neighbors who moved in next door.

Less than 1,000 feet away - just across a corn field - is where Duke is dumping coal ash from energy plants in Wilmington and near Charlotte. The Mansfields say life has taken a dramatic turn for the worse.

"It makes me angry! I mean these are the most inconsiderate people I have ever known," said Mansfield.

It's been two weeks since Duke began hauling in what will be millions of tons of coal ash to use as infill at the old Brickhaven clay mine in the rural stretch of Chatham County.

It's safe to say the Mansfields are not rolling out the welcome wagon for their new next-door neighbors.

"They're coming in, revving their engines by here all the time. And that's probably the biggest change - just the noise!" said Lisa Mansfield.

They say the noise goes from dawn till dusk - even on Sunday when they heard what sounded like jack hammering. Their quiet country road is now flooded with 70 to 80 cars a day - workers headed to the coal ash site - who the Mansfields say are not being good neighbors.

"I pick up beer cans, I pick up wine bottles," said Ellis. "Debris from lunch, I guess where they eat lunch and when they leave here, they want to empty their trash on my property."

The dump trucks arriving in Chatham County to dump coal ash are part of a state-mandated cleanup effort tied to a massive coal ash spill in the Dan River. In response to the Mansfield's complaints, a Duke spokesman wrote:

"We are committed to minimizing impacts to mine neighbors throughout this process."

"Our contractor, Charah, has only been hauling ash there for two weeks and it is carefully monitored as trucks approach and enter the site at very slow speeds."

As far as any environmental impact, Duke says it is taking every necessary precaution to line and seal that mine to ensure none of that coal ash chemicals get out.

But, distrustful of Duke, the Mansfields have already done an independent test on their well water just to be safe.

Ellis Mansfield says he's more than skeptical anything will change. His quiet country life has been replaced with anger.

"This coal ash is completely destroying the property value," he said.