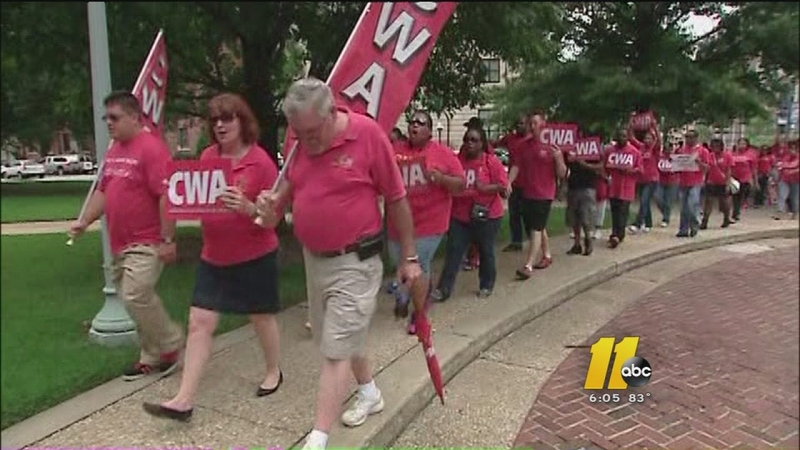 RALEIGH, N.C. (WTVD) -- The so-called Moral Monday movement is on the move again.

Friday, the NAACP and Forward Together Moral Movement kicked off a week of protests outside the State Capitol Building in Raleigh. Each day has its own theme ranging from labor rights (Friday's topic) to education, women's rights, Medicaid expansion, and voting rights.

"It's important to come together as a larger community to say that your issue is my issue," said Rev. Rodney Sadler, a Charlotte pastor. "We're working on this together."

"Because we think labor rights are so important in the upcoming election," said Angie Wells, with the Communication Workers of America. "Labor rights, fair living wages are moral rights, so we think it's important to tell our state legislature about fair pay for women, and I don't believe that's still an issue but it is."

But Wells said she and other workers plan to return to the Capitol for other protests scheduled throughout the week.

"We think that it's great to highlight and really talk about issues that are important to our constituency, but it's also important for everyone to come together," she said.

"We are challenging the policies of extremists who have overtaken the offices of governor and legislative leadership," said NC NAACP head Rev. William Barber. "Their attacks on the poor, working families, people of color, women and children, the elderly, immigrants and the undocumented, the LGTBQ community and other marginalized groups are unprecedented in modern times."

Last year, more than 1,000 people were arrested during a series of 'Moral Monday' protests in North Carolina.

ABC11 reached out to Governor Pat McCrory's office as well as top legislative leaders. A spokesperson for McCrory sent an email, saying "send along some specifics on any policies along with their solutions and I'll be happy to respond."

A spokesperson for Senate President Pro-Temp Phil Berger directed us to an exchange between Berger and Rev. Barber, in which the Senate leader told the NAACP leader that the priorities would cost the state $7 billion and require raising corporate taxes ten-fold.

A separate analysis by a liberal Raleigh-based think-tank said the state could fund the same policies without raising taxes or bankrupting the state.

The NAACP-led week of protests continues Saturday with a focus on education and criminal justice.