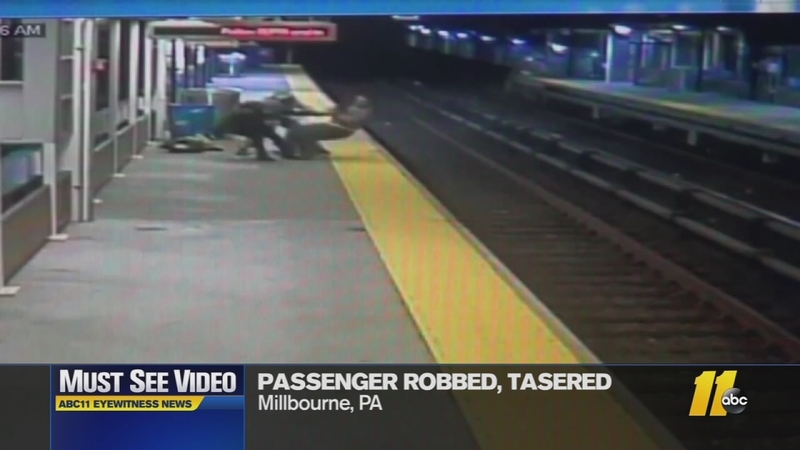 MILLBOURNE, Pa. -- Police in Pennsylvania have released video of a robbery and assault that ended with a man being thrown onto the tracks of the Southeastern Pennsylvania Transportation Authority's Market-Frankford Line.

The incident happened around 12:50 a.m. Sunday.

Police say a passenger fell asleep on a westbound train, when two suspects approached the man and snatched his bag.

The victim woke up and chased the two suspects, a man and woman, off the train and a struggle ensued.

During the struggle, the video showed the woman pull out a Taser and shock the victim twice in the back and once on the shoulder.

"When he's hit in the shoulder, he almost does a somersault onto the tracks - to the live tracks," SEPTA spokesperson Jerria Williams said.

The victim fell on his head on the tracks as the man and woman robbers were captured on video making their getaway.

Meanwhile, with the high risk of a train coming through, there was no one there to help the victim.

After some time, he woke up in a daze. He staggered and then fell right on top of the third rail. He remained there for 90 seconds before getting up.

Apparently he was somehow insulated from the high voltage:

"Fortunately there is a covering for the safety of the third rail from elements, not from people, so he's very lucky," Williams said. "It is absolutely high voltage between 700 to 800 volts of electricity and it is just absolutely amazing that he survived that he was not harmed. Someone was looking out for him."

The victim was hospitalized for concussions and other injuries, but is expected to be alright.