WTVD
By Andrea Blanford
RALEIGH (WTVD) -- North Carolina lawmakers are planning to take action to override part or all of Charlotte's newly-passed expansion to its non-discrimination ordinance that allows transgender people to use the restroom of their choice.

The Charlotte City Council approved the controversial plan in a 7-4 vote Monday night. The ordinance, set to go into effect April 1, would allow a transgender person to use either men's or women's restroom in places such as restaurants and gym locker rooms, depending on the gender they identify with.

LGBT advocates praised the move, saying it makes the city safer and more inclusive. But the large and vocal opposition to the ordinance has raised concerns about protecting women and children in particular from those who may take advantage of the policy to gain access to those bathrooms.

"I am disappointed and saddened Charlotte city government initiated overreaching regulations that change basic standards and expectations of privacy regarding restrooms and locker rooms. As I communicated and predicted prior to the vote, state legislative leaders have notified me about introducing legislation that would correct this misguided government regulation and ensure it will not happen in any town or city in North Carolina. As governor, I will support legislative action to address this regulation and will remain committed to protecting the privacy and safety of all men, women and children of all ages in North Carolina. My position is consistent with challenging government overreach by the federal, state and now a local government. After resolving this issue, I look forward to working with legislative leaders to continue our focus on jobs and improving education."

"It's trying to commandeer the private sector to accomplish the social goals of a few extremists," he said.

Stam added the Queen City overstepped its bounds in more ways than one when it also included a provision that would affect businesses contracting with the city.

"One of the provisions of the ordinance is that in order to contract with the City of Charlotte, you not only have to have the best product or the lower price or the best service, you also have to agree to bow down to their ideas of what discrimination means and adopt all their standards," he said. 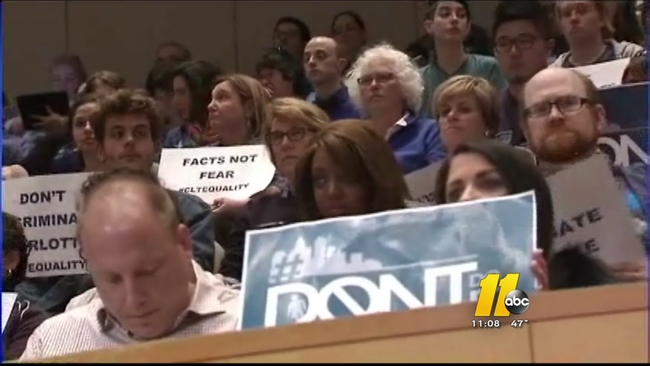