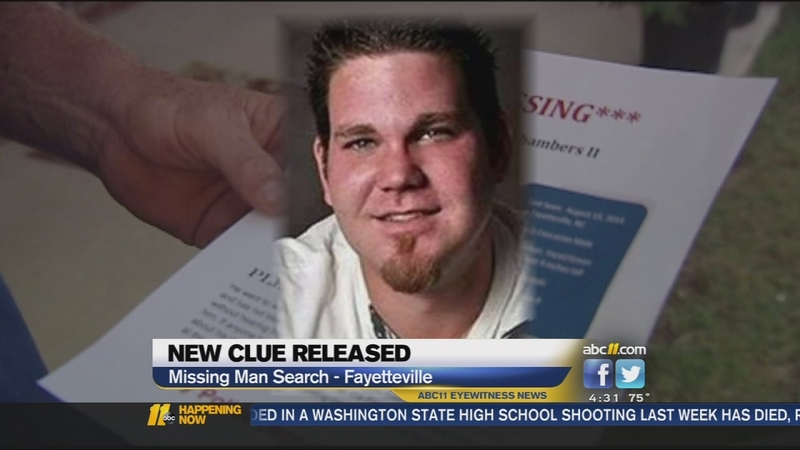 FAYETTEVILLE (WTVD) -- Authorities believe they know the last person who spoke with a Fayetteville man who has been missing since August.

Chambers, 28, was last seen at his Carol Street home on Aug. 15. He worked for his father's construction business, Chambers Concrete, and a co-worker dropped him off at home from work that evening.

When the couple who rented Chambers a room returned home that day, all of Chambers' belongings, including his dog, were still there. But there was no sign of Chambers.

He was reported missing by family by Aug. 26.

Police believe Jacobs may have been the last person to see or hear from Chambers, although they won't detail any other connection between the two. They do say Jacobs is known to frequent the Carolina Motor Inn on Gillespie Street, and they want to speak with him.

In the first few days of Chambers' disappearance, many people told Rachel Wellhouser not to worry.

But two days went by with no reply to daily text and Facebook messages. Her son didn't even reply to their emergency signal word, "Marco."

Now Wellhouser says she has no hope that Chambers is alive.

"I just want to bring James home so he can rest in peace," she said in a tearful interview Monday. "He's not trash."

Wellhouser has lived through the loss of a child. In 2008, her 15-year-old son Michael died after battling muscular dystrophy. James took his older brother's death incredibly hard, she said. James would never "not reply" to her messages, because he'd seen the kind of anguish she endured.

"So him not contacting me and knowing there's been no accident, there's only one other thing that could've happened," she cried. "I know I'm looking for my son's body because I know James wouldn't do this [disappear]."

Police agree that the disappearance is out of character for who they understand to be a predictable, "simple man."

"[He] Always gets up, always gets to work, is always on time...so this is definitely unlikely in something he would do as far as day-to-day routine to just up and leave and not tell anybody," said Fayetteville police detective, Antoine Kincade.

Kincaid said investigators are honing in on the nine day gap between the time Chambers went missing and the day he was reported missing. It's been a challenge piecing it all together.

"Nine days - when we say it's huge, we mean it's huge because you can do a lot over nine days," Kincade said. "You can travel across the country in nine days."

Neither Wellhouser nor James Chambers, Sr. know anything about Jacobs. They only know he could help piece together their son's timeline for investigators.

"I know they're getting close," said Wellhouser.

Chambers is described as a white male, standing about 5 feet 8 inches tall, and weighing between 170 to 190 pounds. He has green eyes and short brown hair. He wears contact lenses or glasses, and has a tribal art tattoo on his right shoulder.