Obama to Alton Sterling's Son: 'The Country Is Not as Divided as It Seems' 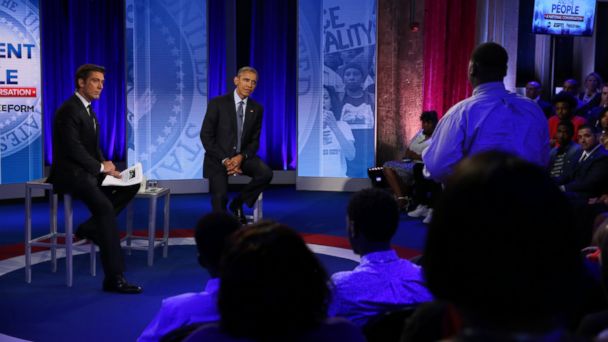 One week after his father was shot and killed by police in Baton Rouge, 15-year-old Cameron Sterling stood before President Barack Obama and asked him to keep his "family safe" and to "unite all the races of the world."

The shooting of Alton Sterling, a black man, by white officers last week outside a store in Baton Rouge, Louisiana, was one of several recent shooting incidents that have left the country on edge and heightened calls for political leaders to find solutions to gun violence.

Cameron, who appeared inconsolable at a press conference last week, called for peace and implored Obama to bring the nation together during a town hall on race relations with the president today titled "The President and the People: A National Conversation."

"I've come to ask one question," Cameron said. "I ask that you keep all of these families and my family safe and the people and the rest of the good police officers safe from bad people and bad police officers. And I ask for your help to unite all the races of this world."

The teenager has been praised for his compassion and for how he is handling his grief with the national spotlight on him, a point Obama made sure to make.

"Let me just first of all say, obviously how proud we are of you Cameron to be able to be here and speak," Obama said. "I couldn't have done that when I was 15, particularly in these circumstances, so I know your family is proud of you."

While police have defended their actions as necessary in Baton Rouge, protesters and many across the nation have called Sterling's shooting grossly excessive and a sign of apparent racial tensions between police and the communities they serve. Officers in Baton Rouge said they saw a gun in Sterling's pocket and that they believed he was reaching for the weapon when they fatally shot him.

Obama used Cameron's question to emphasize that there is broad unrest across the country in the wake of his father's death, the fatal shooting of Philando Castile in Falcon Heights, Minnesota, and the shooting deaths of five police officers in Dallas.

"The country is not as divided as it seems," Obama began.

"We all have hopes and dreams and families and children and we all want the best for them," he continued. "But because of the history of this country and the legacy of race and all the complications that are involved in that, working through these issues so that things can continue to get better is going to take some time."

He expressed his own faith in the nation's ability to come together, saying younger generations give him hope.