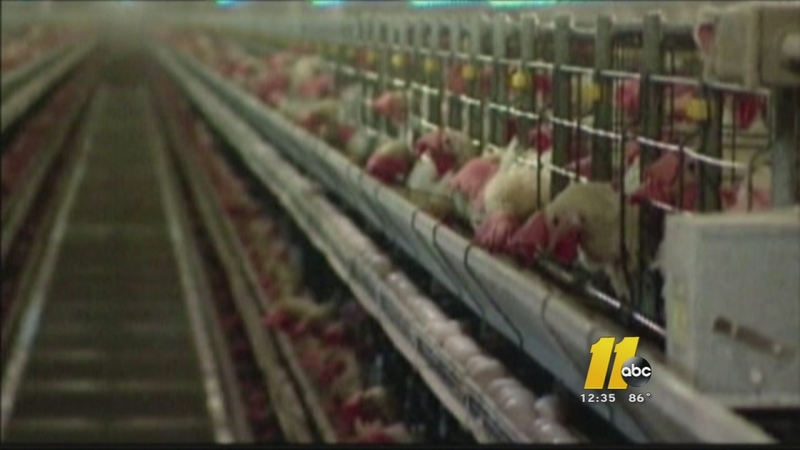 RALEIGH (WTVD) -- State officials are taking steps to prevent the avian flu from spreading to birds in North Carolina.

On Wednesday, the Agriculture Department addressed the growing concern at the N.C. State Fairgrounds.

Avian flu has caused the price of eggs to spike higher than they have in more than 60 years. The biggest threat to the state's poultry industry will come next fall during the migratory bird season.

Scientists believe avian flu is spread by wild waterfowl and because of that, state agriculture officials decided ban all poultry shows and public sales from mid-August to mid-January.

Right now the avian flu is spreading from the Northwest to the Midwest, already hitting 20 states. But it could easily move south when wild waterfowl begin migrating in that direction in just a few months.

"We know this is going to affect a number of poultry shows and kids who have planned to exhibit at their county fair or their state fair," said NC Agriculture Commissioner Steve Troxler.

Troxler said the decision to ban shows wasn't made lightly or in a vacuum. He was joined by the state's lead veterinarian, Doug Meckes, who recently returned from a summit with others in his position across the Southeast.

Meckes said it's not "if" the virus comes to the Southeast, but "when."

"We believe that we will face an outbreak of high-path avian influenza in the coming fall season," Meckes said.

One of the biggest concerns is free-range chickens and turkeys. Unlike those raised in a poultry house, free-range animals are easily exposed to the droppings of wild birds.

So, the State Agriculture Department is looking into inexpensive shelters for organic flocks.

Although the initial concern about avian flu is from infection by wild birds, once it does arrive is can be spread by humans. The state is trying to educate those in the poultry industry about how to limit the spread if it does arrive in North Carolina.

"We will certainly encourage everyone that moves poultry and engages in any private poultry sale that they implement strict biosecurity as they return those birds to their home," Meckes said.

Infection is also a concern for the many who raise backyard chickens. As for humans contracting the flu, experts say it's possible, but unlikely.

The cooking process of infected poultry or eggs should keep humans from contracting the bird flu.