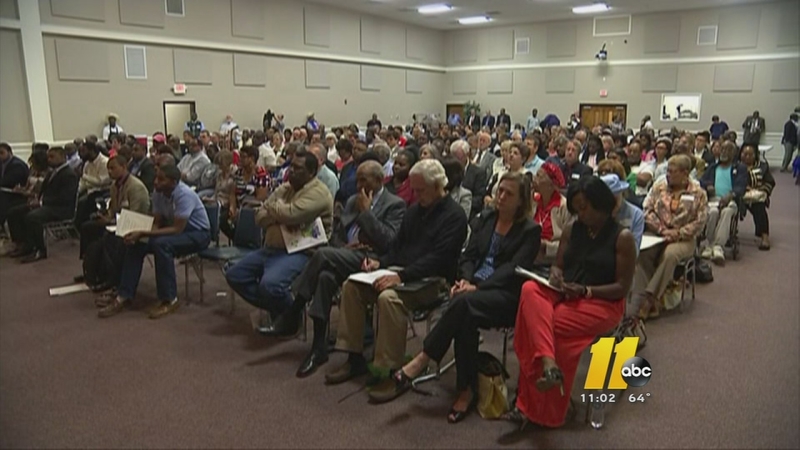 RALEIGH (WTVD) -- Some big names in the Triangle joined in a conversation about race and racial attitudes at Martin Street Baptist Church in Raleigh Wednesday evening.

Organizers planned for an audience of 150 but nearly 300 people showed up for the discussion that many said was long overdue.

"(The goal) is to be proactive, to bring community together and say we want to have a conversation and talk about race," said Nancy Petty of Pullen Memorial Baptist Church.

"I want to hear from city leaders about how they see students interacting with corporate partners, government officials, law enforcement officers, especially in the diverse community that Raleigh is," Dr. Tashni Dubroy, the president-elect of Shaw University.

From the start of the 90 minute question-and-answer session, ground rules were clear - there would be no name-calling and no personal attacks. However, on the heels of racial strife like what happened in Baltimore last month, there were plenty of tough questions.

"How do we begin to seriously address and attack the problem of the pipeline from school to prison," asked Raleigh resident Robert Fink.

"That's a very hard question, but I think it begins with education both at home and at school," said Wake County Superior Court Judge Abe Jones.

"In view of the police killings across the country, what are you doing to provide diversity training for your law enforcement," asked Raleigh resident Mildred Campbell.

"The police department's been hiring (African Americans) since the 40s, and the last check I did they had less than 100," said Raleigh resident Welton Jones.

There were concerns the conversation would only be had in terms of black and white. The panel's lone Latino voice made sure that didn't happen.

"I hope that again as you expand these discussions that we are more inclusive of me, you, us," said Norma Mari, of Hispanic ALPES.

One of the outcomes organizers hoped for was to prove the community could have an open and civil discussion about this often difficult topic. The next step is to keep the dialogue going.