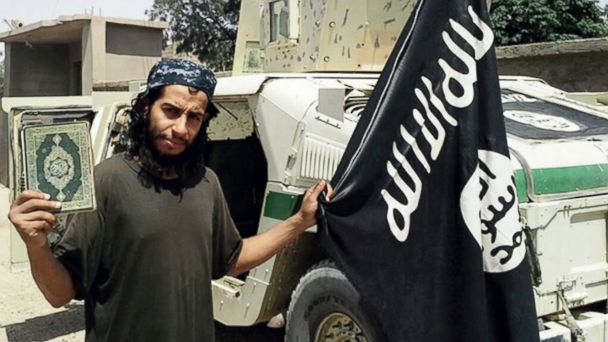 Suspected ringleader Abdelhamid Abaaoud, who was killed in a police raid, and anther suspected attacker, found dead in a Saint-Denis apartment, were planning to attack French business district La Defense, northwest of the city, on Nov. 18 or Nov. 19, Molins said today.

Molins also released further details on the Nov. 13 attacks in Paris that left 130 dead, including how Abaaoud and another man came back to the scene of the attacks later that night.

Abaaoud's cellphone was traced to the 10th, 11th and 12th Districts while the hostage situation at the Bataclan concert hall continued, Molins said.

Hasna Aitboulahcen, the ringleader's cousin, was "very aware" of Abaaoud's role in the Paris attacks, the prosecutor said. Two days after the attacks, Aitboulahcen received a call from Belgium asking for a place for Abaaoud to stay, said Molins, and set up contact with an apartment owner. Then, two days later, Aitboulahcen met with Abaaoud, who was hiding behind a bush north of Paris -- just before Abaaoud died in a raid.

Molins also shed light on the role of suspected attacker Salah Abdeslam, who remains at-large, saying he was "likely" the driver for the team that attacked the Stade de France soccer stadium.

The prosecutor also said that there were at least nine attackers, more than the eight originally believed to be involved.

Belgian and French officials are looking for a man Belgian authorities said today was seen with Abdeslam, the fugitive, two days before the massacre.

Mohamed Abrini, 30, was caught on camera at a gas station with Abdeslam on Nov. 11, two days before the Nov. 13 Paris attacks, Belgian authorities said. Abrini was driving a Renault Clio that was used two days later to commit the attacks in Paris, authorities said.

Abrini should be considered armed and dangerous, said authorities. Anyone who sees him or has information on his whereabouts is asked to contact the police immediately.

Five people in Belgium have been charged in connection with the attacks, the most recent of which was today. The fifth person, whose name was not released, was detained following raids Monday, and is now facing charges "for participation in the activities of a terrorist group and terrorist murders," the Belgian Federal Prosecutor's office said.