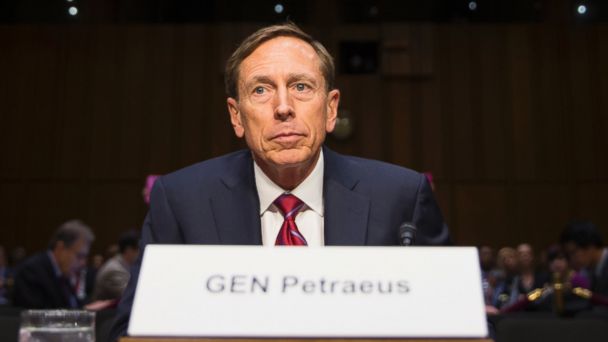 ABCNews
By JUSTIN FISHEL
Retired Gen. David Petraeus apologized today to lawmakers for sharing classified information with his biographer and mistress Paula Broadwell in what was his first public testimony before lawmakers since resigning as CIA director.

Petraeus began his testimony by apologizing for the scandal that led to his resignation and conviction in a federal court.

"It was a violation of the trust placed in me," he said.

Testifying to the Senate Armed Services Committee, Petraeus said the U.S. military should stop Assad's use of devastating and indiscriminate barrel bomb attacks, which most observers agree are cause for a majority of the death in Syria and the subsequent human migration.

"We could tell Assad that barrel bombs need to end or we could stop their air force from flying," Petraeus said. "We have that capability."

Grounding the Syrian Air Force would require the creating of no-fly zone, which would significantly increase the involvement of U.s military forces.

"It would demonstrate that America has the power to stand against Assad," Petraeus said.

Petraeus did not mention the fact that Russia has deployed 28 military aircraft to its base in Syria for the purpose of helping Assad fight ISIS. The presence of Russian aircraft could complicate the establishment of a U.S. made no-fly-zone.

The former head of U.S. forces in Iraq and Afghanistan also said he would establish enclaves protected by U.S air power in Syria where Sunni forces could be trained to fight and internally displaced people could seek refuge. To support that effort, Petraeus called for US boots on the ground in Syria in the form of "advisors or support elements."

Petraeus recommended that the U.S. military change it's base of operations in Iraq from Kuwait to Baghdad.