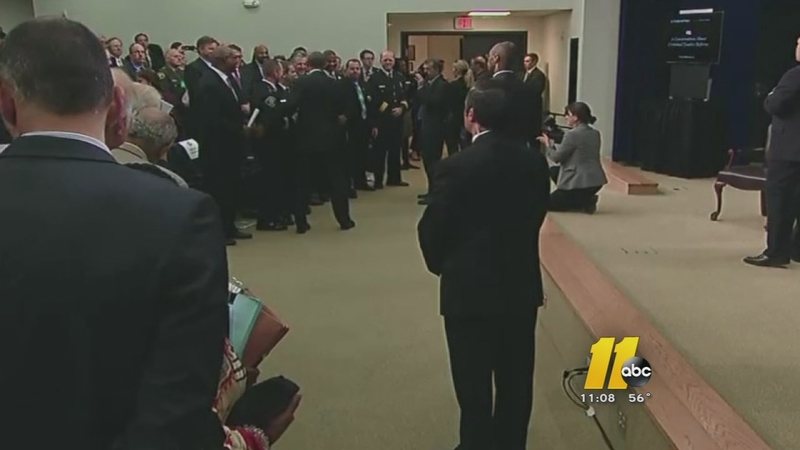 RALEIGH (WTVD) -- Fresh out of a White House forum on criminal justice with President Obama and other police chiefs - including Fayetteville Police Chief Harold Medlock - Durham Police Chief Jose Lopez told ABC11 Thursday that the consensus at the gathering was law enforcement has to change.

At the meeting, President Obama spoke of his own experiences as a young black man in America.

"As a young man, there have been times where I was driving and I got stopped, and I didn't know why," he said.

Obama said there are specific concerns about whether blacks in certain areas are treated unfairly or are more frequently subjected to excessive force by police.

But the president said people should also "understand the overwhelming majority of law enforcement's doing the right thing and wants to do the right thing" and "recognize that police officers have a really tough job and we're sending them into really tough neighborhoods that sometimes are really dangerous and they've got to make split-second decisions."

Fayetteville and Durham's police departments have faced countless accusations through the years of racial bias in policing, and both departments are implementing new programs to address those concerns.

"What a lot of people aren't seeing, because it's happening so fast, is the turn law enforcement has taken, in a positive way," said Lopez.

Lopez said many of those positive changes are already happening in the Bull City.

Lopez also listened as the president renewed his call for reducing prison terms for non-violent offenders.

He's also arguing for more opportunity for poor kids, saying police and prosecutors can't shoulder the entire burden for fixing what politicians agree is a criminal justice system in need of repair.

"We know that young people do stupid stuff and as they get older they get a little less stupid. I speak from experience," said the president with a laugh.
Lopez said he'd like to see change there too.

"Finding ways to keep them from spending most of their lives in jail and destroying their lives," he offered.

Lopez, who recently agreed to step down as police chief at the end of this year, made clear Thursday he wants to continue to be a part of these kinds of discussions and he'll be looking for new opportunities in law enforcement.

Thursday's forum was led by Bill Keller, editor in chief of The Marshall Project. The nonprofit online journalism organization focuses on criminal justice issues in the U.S.

Before the session, a Senate panel cleared legislation that could make nonviolent drug offenders eligible for shorter prison sentences.