The protests have drawn hundreds of people to Durham streets and have landed more than 30 people in jail. So far, they haven't resulted in property damage or injuries, but some wonder if that will last if there are future protests.

The protests in the Bull City kicked off just outside Mathews' restaurant. She says she is concerned about her business getting damaged but said she has insurance and thinks the conversation about race and police brutality needs to happen.

"We are a community space," Mathews said. "We don't have one side or the other. We just like for both sides to be able to express how they feel about things. We know that there are some people, not Durhamites, who come to cities like this and stir up the crowd, and we just hope that does not happen here."

"Hopefully, we wouldn't have the type of problem that you see in other cities," said Mayor Bill Bell.

Asked whether the city should "hope for the best but plan for the worst," Bell replied, "I'm going to leave it up to the police department to do that."

Bell was sharply critical of protesters, who shut down the Durham Freeway last week.

"That type of activity is unacceptable," Bell said, "and we're not going to tolerate it in Durham. People should be prepared to accept the consequences of their actions."

Bell said he has asked for a report on the police response to both situations and hopes Chief Jose Lopez will have a plan based on what's happened in the past two weeks. Lopez told ABC11 he isn't commenting.

Bell says the state has offered to send in the National Guard if the protests continue but Bell has not taken the state up on the offer. There are also no official plans to have a community-wide conversation about race and police brutality.

"Who do you have the conversation with," asked Bell. "I don't think anyone would accuse Durham of being not open to having conversations. The issue is broader than just Durham. It's against the institution of policing."

Ask Mathews, though, and she'll tell you a conversation is exactly what's needed.

"I think everyone has a part in this in order to keep Durham non-violent and keep things safe for everybody. We don't want people walking around to get tear-gassed. We don't want a stray bullet. We don't want any of that. So, I think it's a community effort. It's a police effort. It's a city council effort. Everyone should be having that conversation whether it's here, city chambers, anywhere because it only takes two seconds for it to ignite." 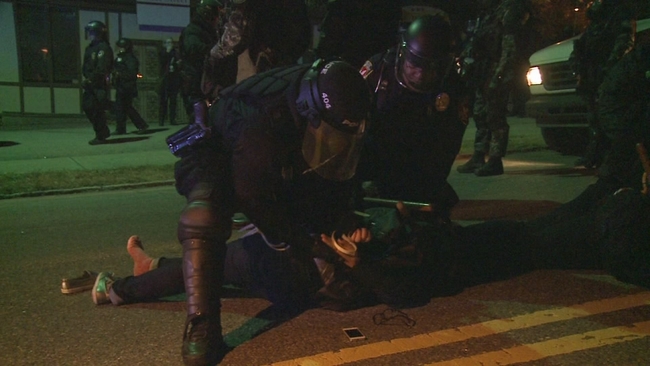