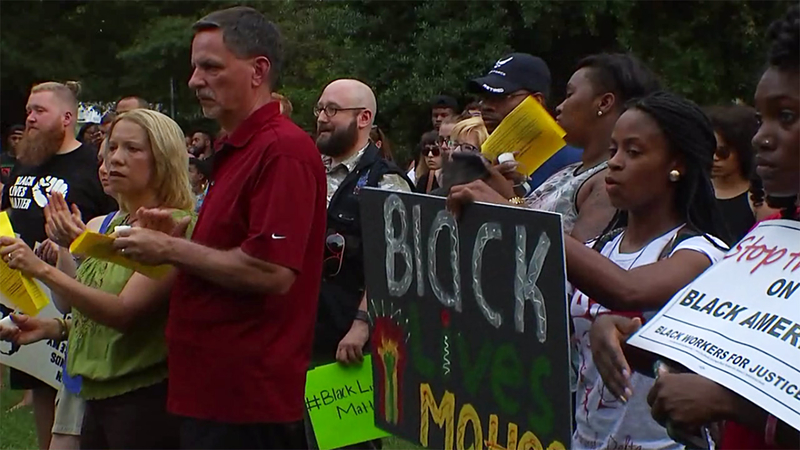 RALEIGH (WTVD) -- The mood was a mostly somber one in Moore Square on Friday night.

Many condemned the attack on the Dallas police officers on Thursday. But at the same time, they defended the Black Lives Matter movement as a peaceful one -- that won't be deterred by what happened in Texas.

Names of the 123 black people killed by police, so far this year, read aloud at Raleigh vigil. P pic.twitter.com/pNjA59XBrE

So, in the heat, they gathered by the hundreds in the park. They lit candles and read the names.

"Ali Banks, 64, Oklahoma!" echoed through the speaker, as the 123 black people killed by police, so far this year, were read aloud one by one.

While they denounced the ambush in Dallas that left five officers dead, the event went on as planned."

"It has taken a tragedy, the five officers that were killed in Dallas, to wake up the conversation on how black families are being treated on a daily basis," Byrd said.

Toward the back of the crowd, Cheryl Ellis and her 13-year old daughter Kayla wore "Black Lives Matter" T-shirts. They said they were both disturbed by what happened in Dallas.

"Violence is never the answer. Whether it's the police, whether its civilians," Cheryl said. But, she also said she remained committed to the cause printed on her chest.

"Black people don't have a choice to be black. We are born black. We can't take off our black skin. But people can choose their jobs."

After Dallas, Black Lives Matter critics, like former Republican Congressman Joe Walsh, blasted protesters and President Obama on Twitter -- blaming them for the violence against cops.

"Black Lives Matter has always been a peaceful movement," said Danielle Purifoy, a vocal community activist about Walsh's tweet. "It's always been pro-black, but pro-black isn't anti-everyone else, right."

Those who attended Friday's vigil were asked to sign a petition that will be sent to the mayor and Raleigh City Council. The group is continuing its push for police reforms in the city.