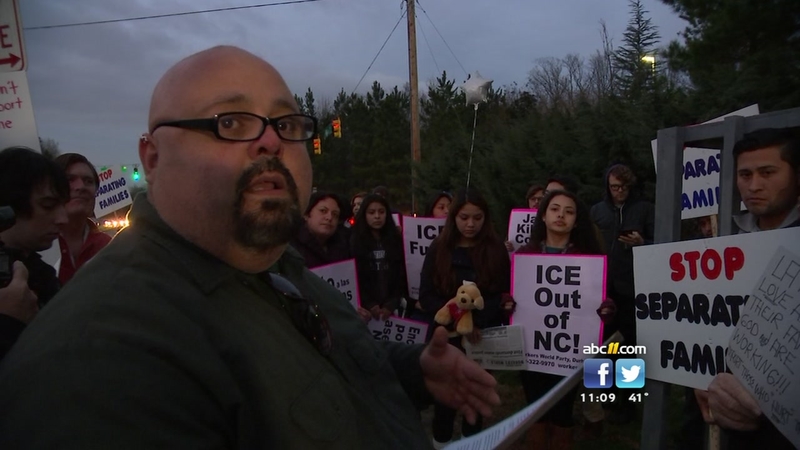 RALEIGH (WTVD) -- Immigrant advocate groups are calling on President Barack Obama to put an end to deportation raids they say are ripping families apart, and putting them in danger.

A group of about 80 people stood on the sidewalk holding signs that read "Stop Separating Families." They chanted, sang, and read stories of families who have been broken apart because of deportation. Many wore tape over their mouths in solidarity with undocumented immigrants who have been detained or deported. For each child separated from a parent, demonstrators released a balloon into the air.

The vigil is one of several happening across the Southeast, calling for Obama and the Department of Homeland Security to put an end to deportation raids affecting immigrants who came to the U.S. illegally, escaping drug wars and violent crime in their home countries in Central America.

"I think the saying that I heard one time is that, no one leaves home unless home is in the mouth of a shark," said Will Saenz, El Pueblo community organizer. "And basically these people are escaping, like I said, crime, drug wars, and they're coming here for the exact same reasons that any of our relatives did or what have you. They work hard. They're out here for the same dream that we are."

The DHS said its raids are targeting those who have not left the country despite receiving their final orders to do so.

In Wake County, Sheriff Donnie Harrison said 17 officers are dedicated to the work of verifying documentation. In 2015, 221 immigrants were found to be in the country illegally and listed for deportation.

Demonstrators argue the raids affect innocent families; immigrants who don't aim to break any more laws, and wish to be treated as refugees, fleeing dangerous conditions back home.

"I've known some people that had to go back or they were deported, and as soon as they got there, they either got killed or banished to their country," Jabriel Martinon said. "It's just terrible."

"That's the thing that some people don't realize, that all the struggles and all this to some folks is worth it, because for the betterment of their children," Mike Figuares said.

Last Friday, 22 Democratic senators wrote a letter to Obama, who ordered the recent surge in deportation raids, asking him to put an end to them.